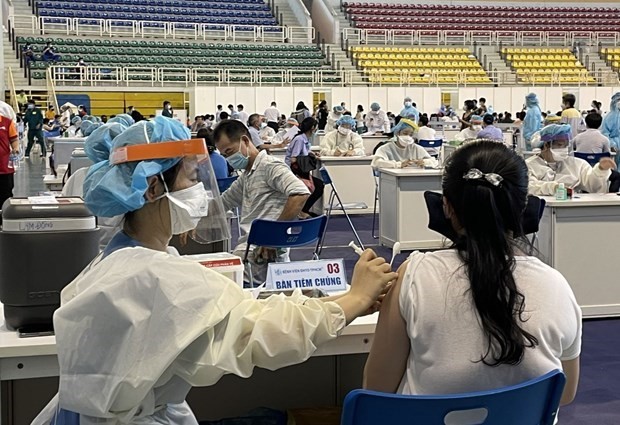 Residents at a vaccination site in HCM City. (Source: VNA)

Speaking at a meeting with economic and medical experts last earlier this week, Secretary of the municipal Party Committee Nguyen Van Nen said: “The city is under huge pressure to reopen the economy or it will be too late.”

The level of suffering of the economy and people has reached its limit due to prolonged lockdown measures. As such, the city will develop a roadmap for reopening so that it can adapt to and live safety with the virus, he said.

The city will gradually narrow down areas with very high risks and try to expand the number of low-risk areas, according to Nen.

Vu Thanh Tu Anh, Director of the Fulbright School of Public Policy and Management, said that reopening for economic development and social security has become more urgent than ever as both businesses and people, especially the poor, are struggling due to the lockdowns.

“The economic cost is huge if we delay the reopening further,” he noted.

He said it was too expensive to conduct large-scale testing for the city’s entire population. In addition, the city’s revenue and central government revenue are facing challenges as the cost of pandemic prevention has been extremely high.

Anh called for the Ministry of Health to adjust regulations and safety criteria for the city’s reopening.

Prof. Dr. Tran Hoang Ngan, Director of the HCM City Institute for Research and Development, pointed out that “when the city’s revenue is in trouble, it will also affect national financial resources.”

Economics expert Tran Du Lich has called on the city to change its pandemic fighting strategy and not focus on tracing all close contacts of positive cases.

Le Truong Giang, Chairman of the HCM City Public Health Association, said although the city has applied strict measures for months, the number of cases has not fallen as planned.

Vaccines and medicines are the “two weapons to fight the pandemic,” he said.

“Testing will help to detect cases early so as to avoid the risk of becoming more seriously ill. It will also help bring the tested people back to normal life and restore social activities.”

“Though the city has not been able to contain the outbreak according to the Ministry of Health criteria, it must consider gradually opening up,” he said.

Prof Tran Diep Tuan, Rector of the HCM City University of Medicine and Pharmacy, said the number of new cases had not reached a “safe level” under the ministry’s criteria and the city must discuss the set of criteria and take adaptive measures.

Le Hoang Ninh, former Director of the HCM City Institute of Public Health, said the city’s strategy is to vaccinate everyone because the city cannot remain in lockdown forever.

Ninh said it was important to focus on testing high-risk groups, instead of mass testing, which he said was a waste of resources. “The city must find ways to live with the virus because it is not going to be eradicated.”

Dr Nguyen The Dung, former Director of the city’s Department of Health, said the city needs to focus on setting basic goals such as reducing the number of deaths and seriously ill cases.

The city initially planned to ease lockdown measures after September 15 but the deadline was extended until the end of the month.

It is speeding up vaccinations for its adult population aged 18 and over and consulting with medical and economic experts about a vaccine green card system that would allow people to travel and work with fewer restrictions.

According to the HCM City Centre for Disease Control, as of September 15, the city had administered 8,452,609 vaccine shots, including 6.6 million first shots and 1.7 million second shots. Nearly 1 million people aged 65 and over and people with underlying conditions have been vaccinated.

The rate of first-shot coverage in the city has reached 92.5 percent. The city has set a target to vaccinate all adults aged 18 and above by the end of the year.