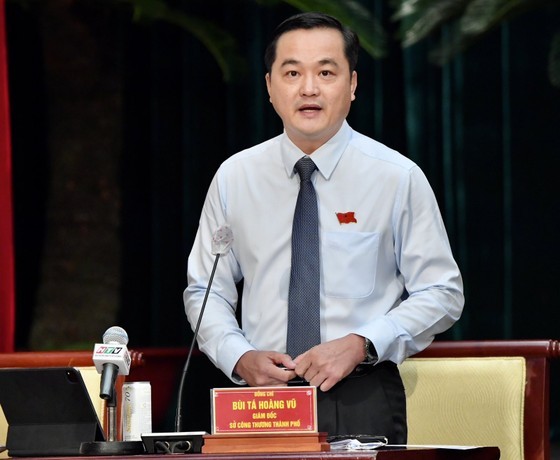 On the morning of December 8, the eighth session of the tenth tenure of the Ho Chi Minh City People's Council continued the second working day.

Deputy Nguyen Thi Nga asked questions about the supply of goods before, during and after Tet so as not to cause price fluctuations, licensing management of e-commerce platforms, selling on social networks, live streaming online sales, the management of fake stalls that are being sold widely online, as well as in wholesale markets.

In answering, the Director of the Department of Industry and Trade said that the commodities for Tet this year will increase between 15 percent and 30 percent. The municipal People's Committee has issued a plan to stabilize the market and prepare goods for Tet. The city Department of Industry and Trade also planned to organize a conference to connect supply and demand and to link with provinces to prepare goods. About 25 percent -30 percent of goods go to Ho Chi Minh City through modern distribution channels such as supermarkets while about 70 percent with about 7,200 tons of food will come to the southern largest city through stalls and wholesale markets per night.

Ho Chi Minh City has mobilized businesses to stock up on goods. Accordingly, more than 30,000 tons of goods have been prepared to serve people during the Tet holidays. Mr. Hoang Vu disclosed that Tet goods this year are ensured to be abundant, but there has been a slight increase in food prices; therefore, businesses have to reduce costs to keep prices.

Regarding the guarantee of petroleum supply, the Director of the Department of Industry and Trade said that there are 549 stores in the city, 61 distributors, and 15 key traders. Every day, Ho Chi Minh City consumes about 6.5-7 million liters of gasoline.

Following the recent developments in the petroleum situation, Mr. Hoang Vu said sorry about the inconvenience when people had to queue to buy petrol. According to him, the petroleum supply for the Southeast Asian country depends a lot on the world, the logistics fee also increases, and the fluctuation is large, but the time band to record the price is too long. Since then, the supply has been very difficult in the past time, some 137 fuel filling stations did not receive goods resulting in a suspension for a few days.

To solve this problem, Mr. Vu said, the authorities have required large enterprises to provide fuel to small businesses as well as facilitate the transportation of petroleum. Moreover, at the same time, competent agencies have proposed solutions to solve problems with the central government. Now the situation has improved markedly. The Department is also aware that petroleum supply is very important, so it should coordinate with agencies to continue closely monitoring developments to have appropriate and timely solutions, said the Director of the Department of Industry and Trade. He promised that the amount of petroleum reserves for before and after Tet will be guaranteed because large enterprises have fully stocked.

Regarding the question that to serve immigrants in the suburbs, does the Department of Industry and Trade have the plan to build a supermarket or a big center at the gateway or in the suburbs?

Director of the Department of Industry and Trade Hoang Vu shared that Ho Chi Minh City operates an open market-based economy, so the impact of the world economy on the southern metropolis is huge. However, the consumer price index (CPI) of Ho Chi Minh City in 20 years has been lower than in the country.

Subsequently, Ho Chi Minh City will continue to create favorable conditions for manufacturing enterprises to access the market. The group of enterprises participating in stabilization is paid about one percent lower interest rate than other enterprises. At the same time, the city will connect and build a stable raw material area.

Mr. Hoang Vu acknowledged that the network of supermarkets and trade centers is not evenly distributed. Accordingly, 47 trade centers are concentrated mainly in the central area while the other 237 supermarkets are not evenly distributed among localities. The city is facing difficulty in the land fund for building more supermarkets and trade centers. The Department has called for large retailers, but accessing land is difficult. In Binh Chanh outlying district, the Department has proposed the district arrange land funds for investment. With more than 800,000 inhabitants in Binh Chanh District, it is expected to be attractive to investors.

The number of convenience stores has increased 10 times in the past 10 years. In 2012, 300 stores are located in the city but this year, there are more than 3,000 stores across the city. This is also a good distribution channel that has made an important contribution to the supply of goods to Ho Chi Minh City during the outbreaks of the coronavirus pandemic. The Department of Industry and Trade will connect investors who are interested in areas far from the center of Ho Chi Minh City such as Binh Tan and Binh Chanh districts.

According to the head of Ho Chi Minh City's industry and trade, the current difficulty is that the space of the market is not large, and the infrastructure of the markets lacks a drainage system, toilets, parking lots, and small stalls.

Regarding market management solutions, the HCMC Department of Industry and Trade connects information about goods sources, and coordinates agencies, units and localities at all levels to encourage traders to build civilized business programs which are very well received by traders. The Department also connects units to exploit information technology and digital transformation in business activities of traditional markets. Currently, there are many online traditional market business models, such as the Utop application.

Another problem is that the current regulations are still facing many difficulties. According to the current Land Law, the market is commercial land, so the land use fee must be collected. While Ho Chi Minh City has considered traditional markets as a public institution for many years, city administrations have just only collected fees to maintain operations and fire prevention. In the coming time, the Department will also coordinate with the Department of Natural Resources and Environment to adjust it accordingly.