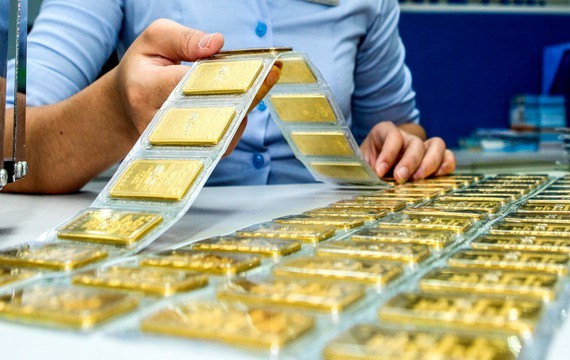 What is also surprising is that the domestic market, such as the Saigon Jewelry Company (SJC) gold price, has also shot up prohibitively high, with even the regulators or the State Bank of Vietnam not intervening at this stage.

In August 2020 the price of gold touched a historic high. At that time, the world gold price peaked at US$2,080 per ounce. In the domestic market, the price of SJC gold sometimes fluctuated around VND5 million and VND6 million per tael in one day. At the same time, gold trading enterprises pushed the buying and selling price to VND3 million to VND4 million per tael.

In March 2022, the world gold price once again increased sharply due to concerns about rising inflation and the war between Russia and Ukraine. Domestic gold trading enterprises are seeing this as an opportunity. Since the outbreak of the war between Russia and Ukraine on 24 February, the peak world gold price showing on 8 March increased from $1,900 to a peak of $2,078.8, equivalent to an increase of $178.8, and when converting the domestic exchange rate, it is equivalent to an increase of VND4.1 million per tael. Simultaneously, SJC gold price increased from VND64 million to a peak of VND74.4 million, up VND10.4 million per tael.

After reaching peak price, the gold price suddenly decreased sharply in two days on March 9 and 10 in Vietnam. Across the world, gold decreased from $2,078.8 per ounce to $1,977 per ounce, equivalent to a decrease of VND2.4 million. In the domestic market SJC gold fell from a peak of VND74.4 million per tael on March 8 to less than VND69 million per tael on March 10. The decrease of SJC gold was more than VND5.5 million per tael. Therefore, in the recent price fluctuation, SJC gold price was always more than double of the world gold price. At the same time, the domestic and international price difference increased to between VND17 million to VND18 million.

However, after everything was put in place, the State Bank has not yet freed the gold market, although many years ago experts had advised the State Bank to transfer gold trading to the market. That is to say, the State Bank should not monopolize the production and import of gold bars but hand them over to various enterprises. The State Bank need only to supervise, and help reduce risks for the management agency and ensure the supply in the market.

After Decree 24 took effect, SJC was licensed by the State Bank to process gold bars. Simultaneously, the State Bank organized a tender to sell gold bars to the market through licensed credit institutions and licensed businesses to create a supply for the market. However, since the beginning of 2014, the State Bank of Vietnam stopped bidding for gold because it stabilized both in price and quantity. The demand for gold in the gold market requires the intervention of the State Bank, who also can bid when the market needs it.

It has been now more than eight years since Decree 24 was issued, and no auction of gold bars has taken place as yet. Since then, SJC gold bars have also become more expensive, increasingly losing contact with the world gold price. When the State Bank stood on the side lines, the supply was cut off for a long time, and commercial banks and gold bar businesses changed their roles to become the market owners who decided buying and selling prices, even creating price fluctuation during periods of strong fluctuations in world gold prices.

The domestic gold price has increased and decreased as per global momentum, but creating the price difference as mentioned above was none other than the units authorized to trade in gold bars. Gold trading companies are more sensitive to fluctuations in world gold prices than anyone else. In the context of the ongoing Ukraine war, SJC gold price has been raised. If buying price increases, the selling price must also increase. However, businesses have pushed the gap between the selling price and the buying price to about VND2 million per tael to ensure their own safety, which means that when buying SJC gold bars, buyers already lose VND2 million per tael.

With this gap, whether the price goes up or down, gold trading enterprises will still make a profit. Only buyers make less profit or even lose because of the strong fluctuation difference in too short a time. This is due to the sudden increase and decrease in business. On March 9, when SJC gold was still at the top, many people began to sell off their gold, so businesses immediately adjusted down sharply by millions of dong per tael.

The State Bank of Vietnam did not intervene in the market, and SJC gold was no longer in supply, as businesses and commercial banks only bought and sold, but their position allowed them to hold the gold and determine the price by themselves. Therefore, it is clear that it is the buyer who will lose in the end. As for enterprises, with such a difference, they certainly make a large profit from the price fever. This is not fair but state management agencies still retain a grip of the gold market for all decisions.

Decree 24 has existed for many years but has done little to stabilize the gold exchange rate. Although Decree 24 purpose is to mobilize gold from the people and bring in a cash flow into production and business activities, the behavior of gold trading companies and of people willing to hoard gold for future opportunities, has slowed trading in other investment channels. This is to say that the goal of mobilizing gold from the people is now difficult to achieve if SJC gold is not recycled within the markets to raise its value.