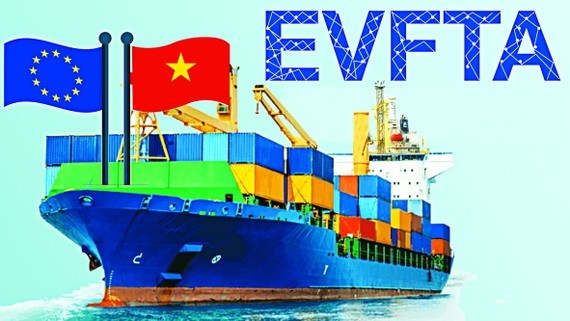 However, despite this growth the market share of goods from Vietnam in the EU market is still quite modest. The reasons behind this need a comprehensive study.

Since August 2020, when EVFTA officially took effect, much expectation was raised about the growth of exports from Vietnam to the EU countries. In the last two years, although the world economic situation has remained rather volatile, EVFTA brought in many positive results. According to Mr. Nguyen Hong Dien, Minister of Industry and Trade, EVFTA has introduced a robust two-way trade and brought in advantages that support the business community on both sides to develop trade activities.

Goods exports from Vietnam to the EU market mostly recorded a good growth. The structure of export products also expanded and diversified when key commodities saw impressive growth such as in machinery and equipment, which were up by 34.8 percent. Textiles and garments saw a growth rate of 41.2 percent, and the turnover of many agricultural, forestry and fishery products also increased at a high rate such as coffee went up by 54.4 percent, seafood saw growth of 41.9 percent, and vegetables and fruits increased by 18 percent.

At first glance, these figures look quite positive, but in terms of the market share of various goods from Vietnam in the EU market, they are still quite modest. Mr. Tạ Hoàng Linh, Director of the European-American Market Department, said the total import turnover of all goods to the EU market is about US$ 2,500 bln per year, while export of goods from Vietnam to this market account for only about US$ 40 bln, which is less than 2 percent of the total import demand in the EU market.

Even if we consider each industry group, the market share is not much better. For instance, the EU is committed to opening the door to vegetable and fruit produce from Vietnam by eliminating 94 percent of the total 547 tax lines on vegetable and fruits and vegetable products after EVFTA came into effect. However, vegetables and fruits from Vietnam only account for 1 percent to 2 percent of the entire EU import demand. Similarly, the market share of many other items such as textiles and garments and seafood also account for just 4 percent in the EU market.

EVFTA is considered a great advantage for Vietnam in exporting goods to the EU as only four Asian countries have signed Free Trade Agreements with the EU, while in the ASEAN region there are only Vietnam and Singapore that are participating. Although the EU is currently promoting FTA negotiations with a number of other countries in the ASEAN region, the process from the negotiation stage to signing the final agreement and taking effect is rather lengthy. Therefore, in the medium term, the enterprises in Vietnam still hold an advantage. Nonetheless, the reasons why products and goods from Vietnam continue to hold just a small market share in the EU needs to be studied.

When it comes to Free Trade Agreements, the main concern is the percentage of businesses that understand and are taking advantage of agreements such as EVFTA. According to Mr. Ngo Chung Khanh, deputy director of the Multilateral Trade Policy Department, only about 8 percent of businesses have quite understood EVFTA so far. Therefore, Mr. Ngo Chung Khanh believes that state agencies must innovate and step-up propaganda, instead of sending long and boring promotional documents. Agencies can produce short, interesting videos focused on the industries and products that businesses can offer. The Ministry of Industry and Trade can coordinate with other ministries to upgrade their portal on FTAs. State agencies must make efforts, otherwise, without efforts, it will be difficult for enterprises to learn and receive the benefits offered by FTAs.

Another reason to be seen is why the market share of Vietnamese products is still low in the EU because Vietnamese exporters mainly send goods to traditional markets such as France, Germany, and Italy. However, there are many markets with high growth potential such as Poland, Finland, and Denmark that have not received much attention from enterprises in Vietnam. Therefore, to make the best use of EVFTA is to increase market share. First and foremost, businesses that want to boost exports to the EU must ensure green and sustainable products as currently the EU countries are leading the world in implementing green goals. The experiences of the Loc Troi Company clearly demonstrate this fact.

In the last few months, the Loc Troi Company exported 1,000 tons of rice under the brand name Cơm-Rice Vietnam to two major French retail chains. Mr. Nguyen Duy Thuan, General Director of the Loc Troi Group, said that in addition to the very active support of the trade deal with France, the company had also prepared for years in advance to meet the strict standards of European buyers. Since 2016, the Loc Troi company set about transforming its cultivation methods and improving its processing and packaging activities, so as to meet the strict standards of the EU market. The Loc Troi Group replanned the planting area, ensured traceability and high environmental standards, and more importantly successfully applied a carbon-free production and farming model.

Until now, Vietnam still has many businesses and industries that have not yet met with the requirements asked by the EU market or have only partially met with these requirements. The main requirement of the EU is to offer green products and environmentally safe products. Faced with this reality, Mr. Ta Hoang Linh has suggested that businesses change their internal workings by cooperating with European businesses, investing in innovation in technology, and using machinery and equipment that is more suitable to increasing their competitiveness. Export markets need to adopt the latest technologies and move towards green and sustainable produce, similar to what the garment industry is doing right now.