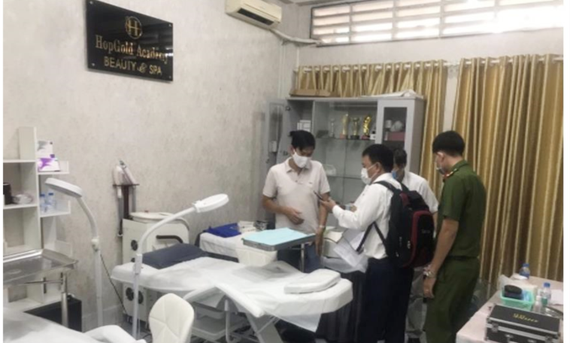 Inspectors give fine to a violating clinic

The Department of Health of Ho Chi Minh City today said that after a hiatus due to the Covid-19 epidemic, several private clinics with foreign medical workers have recently done illegal acts in providing medical services.

There are even many clinics that have committed violations before and have received the highest bracket according to the current law, but it seemed that tough penalties have not deterred them from committing illicit acts.

According to the Department of Health, penalties should be severer such as permanent revocation of practice certificates and operating licenses if they repeat violations of the law, especially acts relating to ethics of medical examination and treatment.

At the same time, the Department of Health recommended that people’s committees in districts should strengthen coordination with it in the management of private medical examination and treatment practice in the city such as inspecting and monitoring clinics that had violated before and suspending violating medical centers from the operation.

Additionally, inspectors should force violating establishments to stop advertising or remove signboards during the period of suspension.

Previously, newspapers have released the news that many clinics exploit the money of patients with sexual dysfunction and disorder to convince patients to pay much money for treatment.

These clinics will perform a series of tests, and ultrasounds for patients, after that, patients will be taken to the operating rooms for a treatment consultation. Whether patients have serious diseases or not, they will be diagnosed to have a dangerous disease that requires early treatment at much more money.