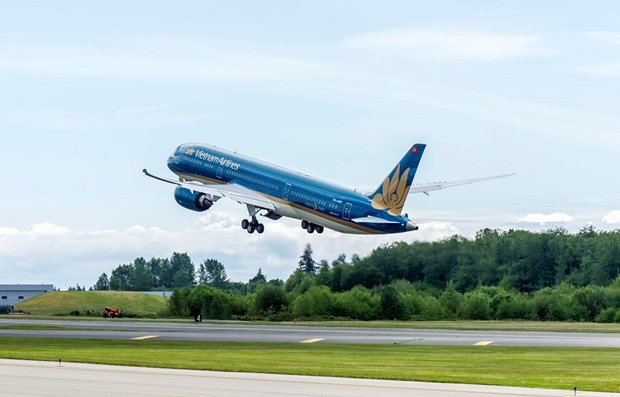 One flight, conducted by national flag carrier Vietnam Airlines, is scheduled to depart from Romania on March 7 transporting 283 Vietnamese citizens. It is expected to arrive at Noi Bai International Airport in Hanoi at noon on March 8.

The other flight, conducted by Bamboo Airlines, will depart from Poland on March 9 with 270 passengers onboard. It is scheduled to arrive at the Noi Bai airport on March 10 in the morning.

The Government recently approved the policy to arrange flights to bring Vietnamese people from Ukraine home.

With spirit of humanity and placing the highest priority to the protection of Vietnamese citizens, the Government allows the organisation of flights repatriating Vietnamese people and their families.

They will receive Covid-19 tests upon their arrival in Vietnam and take necessary medical measures in line with the Ministry of Health’s instructions.

As part of efforts to implement the Prime Minister’s direction, the Ministry of Foreign Affairs has worked with the Ministry of Transport to conduct the two repatriation flights.

The Ministry of Foreign Affairs plans to coordinate with agencies to continue to arrange flights to evacuate Vietnamese people and their family members from dangerous areas in Ukraine to neighbouring countries, and bring those who wish to return to Vietnam depending on the real situation and capacity of Vietnam.

In recent days, Vietnamese representative offices in Ukraine and neighbouring countries have coordinated closely with local authorities and Vietnamese associations in host countries to support the Vietnamese community to evacuate from conflict areas and provide them with temporary accommodations and essential necessities.

As of March 5, more than 2,000 Vietnamese people had been evacuated from fighting zones in Ukraine to neighbouring countries. Of them, over 1,000 had arrived in Poland, 370 had come to Romania, 200 had been on the way from Moldova to Romania, about 190 had reached Hungary and about 40 had come to Slovakia.

Vietnamese in Ukraine and neighbouring countries who need support or wish to flee from war areas can contact the ministry and representative offices in countries through following phone numbers: