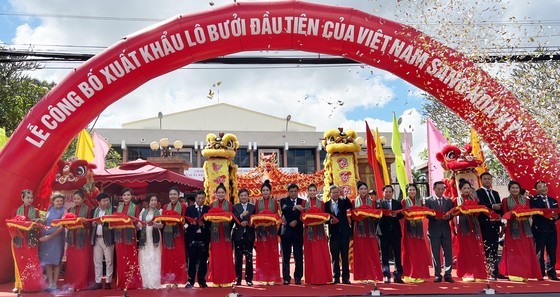 At the ceremony. (Photo: SGGP)

The People's Committee of Ben Tre Province, in collaboration with the Ministry of Agriculture and Rural Development, held a ceremony to announce the export of the first batch of green-skinned pomelos to the US market, on the morning of November 28, in Ben Tre Province.

Mr. Tran Ngoc Tam, Chairman of the People's Committee of Ben Tre Province, expressed his honor and pride to be the first locality to export Vietnamese pomelos to the US market. This result is achieved thanks to the active support and assistance of the ministries and central agencies, the attention and support of the diplomatic missions, the authorities of the importing country, and the business community in the country and abroad.

Along with that, it is the effort of Chanh Thu Fruit Import Export Group Joint Stock Company - the unit that directly registers and prepares necessary procedures to bring Ben Tre green-skinned pomelos to a fastidious market that requires high-tech production processes like the US.

The province has been granted 25 growing area codes to export green-skinned pomelos to the EU and US markets. Of these, 11 codes have been granted for the US market with an area of 156.76 hectares and an output of 3,135 tons per year. 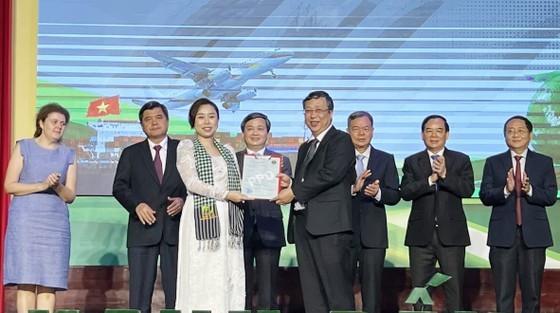 The Department of Plant Protection gives the phytosanitary certificate to Chanh Thu Fruit Import Export Group Joint Stock Company. (Photo: SGGP)
According to the agricultural sector of Ben Tre Province, the province has established 32 cooperative groups and nine cooperatives for green-skinned pomelo farming with a total area of 542.65 hectares. Deputy Minister of Agriculture and Rural Development Tran Thanh Nam said that Vietnam's green-skinned pomelo is the 7th fruit of Vietnam allowed to be imported into the US, after mango, longan, litchi, dragon fruit, rambutan, and star apple. It is the result of efforts to negotiate in a long time of specialized agencies between the two countries and the persistent companionship of the Vietnamese pomelo producers and exporters community. Vietnam currently has 105,400ha of various pomelo varieties, with an output of roughly 905,000 tons. In the Mekong Delta, there are about 32,000 hectares of pomelos, with an output of about 369,000 tons. It is a huge room and opportunity for Vietnamese fruit in general and fresh pomelo in particular to approach the US market. After this event, the agricultural industry promises positive negotiation results to open the market for other Vietnamese agricultural products in the near future.
By Phan Huy – Translated by Thuy Doan