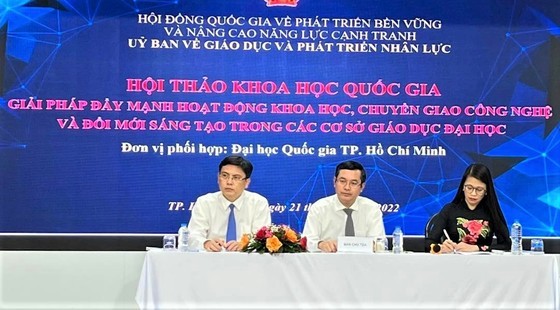 Seminar particpants speak at the seminar

Deputy Director Tran Nam Tu made the statement at a national scientific conference on measures to promote scientific activities, technology transfer, and innovation in higher education institutions organized by the National Council for Sustainable Development and Competitiveness Enhancement under the Committee on Education and Human Resource Development in collaboration with the Vietnam National University - Ho Chi Minh City this morning. Hundreds of managers and scientific researchers at the seminar discussed and proposed solutions to remove barriers in scientific research in terms of investment policies.

Mr. Tu added that with very low investment in human resources, an investment rate for a lecturer with a master's degree or higher is just over VND10 million whereas the mechanism for mobilizing non-budget resources, especially from enterprises, is not effective. It is very difficult to attract investors who want to achieve something with their investment.

At the seminar, Deputy Minister of Education and Training Nguyen Van Phuc said that about 10 years ago, a few Vietnamese scientists had international publications and there were no higher education institutions named in the world’s rankings.

Meanwhile, international publications are very important because that’s the way scientists make a contribution to the knowledge treasure of mankind. However, according to Mr. Phuc, in recent years, higher education institutions have developed strongly citing that the number of international publications, specifically, within about 5 years of publishing in prestigious journals, has been triple.

Regarding the general policy framework, the Deputy Minister hoped that at this seminar, the schools would have suggestions to have new development steps in the coming time.

Mr. Phuc also said that today the ministry has submitted to the Government a decree regulating scientific and technological activities in higher education institutions. It is hoped that this decree will be promulgated together with other amended and supplemented educational law documents to help schools to solve problems relating to the application of transfer and commercialization of research results.

Another problem is that, according to Mr. Tu, higher education institutions have not had an attractive mechanism to encourage lecturers to participate in scientific research. There should be regulation on lecturers’ working time in a school year for doing scientific research. He proposed there should be a policy and mechanism to create motivation for lecturers to participate in research.

From the above limitations, Mr. Tran Nam Tu proposed to review, supplement and rebuild the policy system on a regular basis because with the present development pace, legal documents should be continuously updated. There have been many difficulties in attracting Vietnamese experts abroad, foreigners participate in teaching and research at training institutions in Vietnam. Difficulties include making visa, and work permit applications; worse, lately, foreign intellectuals had to send submissions to the Employment Department of the Ministry of Labor for a permit.