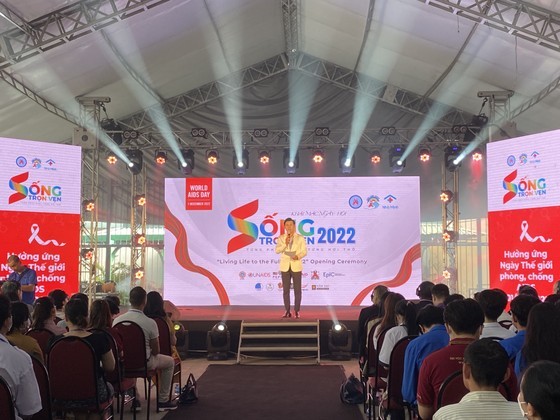 Yesterday morning, the Ho Chi Minh Communist Youth Union in collaboration with the Ho Chi Minh City Association for HIV/AIDS Prevention and Control and some units organized the ‘Full life day 2022 - Every minute, every breath’.

This activity is also part of the national action month on HIV/AIDS 2022 and the anniversary of the World AIDS Day when people around the world unite to show support for people living with and affected by HIV and to remember those who lost their lives to AIDS.

According to a survey of 1,623 people infected with HIV by the Vietnam Network of People Living with HIV in the period from 2011 to 2020, Vietnam has high rates of a stigma-a standardized tool to gather evidence on how stigma and discrimination impact the lives of people living with HIV. High rates of stigma experienced by key populations (such as MSM and sex workers) impeded access to HIV services. As a result, 27.2 percent of people missed treatment for fear of others knowing their condition while 69.2 percent of infected people are worried that others will find out their infection status, delaying testing and treatment. Just more than 50 percent of people living with HIV said that it was easier to disclose their infection status in stages.

Over the past time, the Ministry of Health has issued many directives as well as provided training courses to combat stigma and discrimination against people living with HIV/AIDS in addition to improved quality of health services and preventive services such as drugs Arv, Prep and the health sector has made considerable achievements.

At the festival, more than 200 young people also participated in communication activities on reducing stigma and discrimination against people living with HIV/AIDS.

By 2013, thanks to the support of domestic and foreign resources, Ho Chi Minh City has built community groups to support people living with HIV, not only in Ho Chi Minh City but also in other provinces to find new patients so that the association can help them get access to treatment services as well as accelerate the end of the pandemic by 2030.