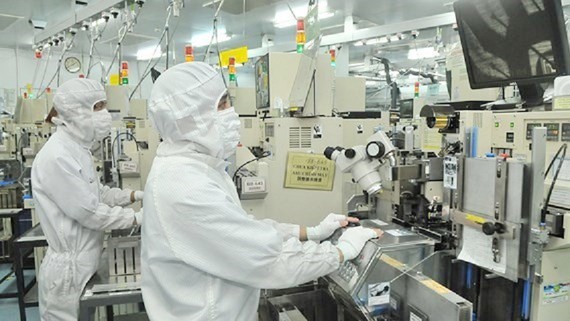 However, the total registered FDI capital in Vietnam in the first quarter, including newly-registered capital, adjusted capital, capital contribution, and share purchase by foreign investors, only reached $8.91 billion, down more than 12 percent over the same period last year.

Registered FDI capital dropped by more than 12 percent due to a sharp decrease of over 54 percent in newly-registered capital. In the context that Vietnam is striving to become the world's high-tech factory, this figure is noticeable. However, it should be added that, in the same period last year, there were two newly registered billion-US-dollar projects, contributing up to $4.41 billion out of $7.2 billion of newly-registered capital.

Meanwhile, with an increase of 41.6 percent in the times of projects adjusting capital and an increase of 93.3 percent in the volume of additional capital, it shows that foreign investors' confidence in Vietnam is maintained and fortified. Vietnam's industrial production is also growing quite well. In the first quarter, the processing and manufacturing industry continued to show the role of a driving force, leading the growth with an increase of 7.79 percent, showing a recovery momentum after two years of being heavily affected by the pandemic.

Up to now, foreign money has poured into 18 out of 21 economic sectors of Vietnam. Manufacturing took the lead, accounting for more than $18.1 billion of investment capital, equivalent to 58.2 percent of total investment capital. One favorable feature is that the North and the South attract different manufacturing sectors. The North is known as the center of heavy manufacturing, oil and gas, electronics, and high-tech industries, and most of the traditional manufacturing industries, such as garment and textile, are attracted to the Southern region. The map of projects shows that foreign investors are still focusing on big cities with good infrastructure.

Besides the traditional advantages, such as competitive labor costs and signed free trade agreements, investors investing in Vietnam can also benefit from incentives. For example, in Decree No.57/2021/ND-CP, the Government has supported industries to supply raw materials, spare parts, and components for the manufacturing sector. For corporate income tax, Vietnam has been applying many incentives, such as tax reduction and exemption for large production projects with a capital scale of over VND6 trillion, incentives in high-tech zones, some industrial zones, and difficult socio-economic areas.

Of course, for the goal of directing capital into the manufacturing sector to be realized, the inherent weaknesses need to continue to be improved more quickly and effectively. It is to raise qualifications and skills for the domestic workforce, upgrade and complete infrastructure, simplify and enhance the effectiveness and efficiency of the legal environment, and reform administrative processes and procedures, especially at the local level.