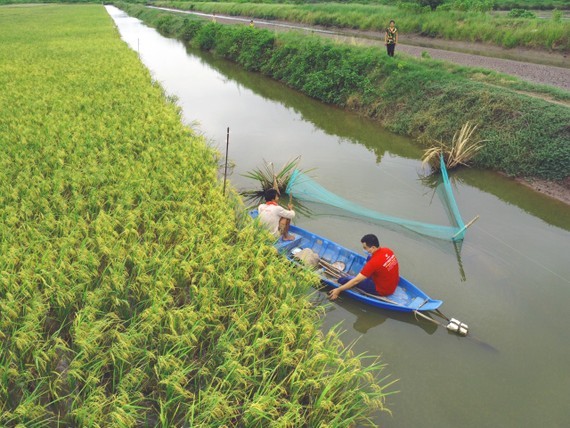 Farmers moan about galloping cost of agricultural materials
Therefore, for fear of losses because of the dramatically increased cost of materials for growing rice, many farmers left the land bare in the last autumn-winter rice crop. However, farmers, at last, had no choice but grow rice, fruit trees, and shrimp as they cannot leave the land empty forever.

Farmer Pham Cong Danh in the Mekong Delta Province of Kien Giang’s Chau Thanh District in Mong Tho Commune said unhappily that he has grown rice in 8 hectares of paddy field for over 10 years but he has never seen the price of fertilizers and pesticides decrease, only increased more or less. He took an example. Previously, the price of urea fertilizer was about VND400,000-VND500,000 a bag (each bag weighs 47kg), now a bag fetches more than VND1 million. With increased production costs, despite this autumn-winter rice crop being bumper, the profit still cannot be as high as the previous ones.

According to Mr. Danh, the price of agricultural inputs has recently doubled, affecting the production and profits of farmers. Worse, especially, since the price of gasoline increased last month, farmers bore the burden of costs in production and transportation.

Elsewhere in the Mekong Delta, farmer Nguyen Thuy Nga in An Khanh Commune in Chau Thanh District in Dong Thap Province is worried when the price of agricultural materials, especially fertilizer, increases without stopping. According to her, each hectare of rice must be fertilized with 600-700 kg of fertilizers of all kinds. In the last rice crop, her profit dropped 40 percent because of the increase in fertilizer prices. Currently, all fertilizers continue to increase, and the risk of the upcoming winter-spring crop 2022-2023 will be a capital loss if the price of rice does not increase, Ms. Nga said.

In the last recent six months, fertilizer prices have increased very high, and some types have increased over 100 percent. For example, the price of urea fertilizer is VND16,000 a kg, while in the same period last year it was only about VND6,700 a kg. Many fertilizer traders also complained because the prices of various types of fertilizers nearly doubled, making their business very difficult. Mr. Nguyen Phuoc Hung, owner of Hung Loi fertilizer agent in Hon Dat District in Kien Giang Province said that currently, the price of urea fertilizer is about VND960,000 a bag while the price of domestically produced potash is nearly VND 800,000 a bag. Compared to the same period last year, the prices of fertilizers increased by at least 80 percent or more, of which the highest increase was urea over 125 percent, and DAP fertilizer increased by 150 percent.

Farmers in the Ca Mau peninsula are suffering double losses when the price of aqua feed skyrocketed but the price of shrimp declined at the end of the year. Normally, shrimp prices go up at the end of the year because factories step up purchasing and processing to supply export orders, but this year is not the same. According to traders in the Mekong Delta, in the last 2 months, the price of white leg shrimp has dropped sharply. Shrimp breeders said that shrimp prices have increased and decreased at different times, but prices of agricultural materials and aqua feeds have almost only increased without falling. Therefore, the farmers and breeders have made little or no profit.

Mr. Tran Van Viet, Director of Thanh Cong Industrial Shrimp Farming Cooperative in Tan Dan Commune in Ca Mau Province’s Dam Doi District said that shrimp farmers face many difficulties such as weather, diseases and especially the price of food has gone up. Since the outbreak of the Covid-19 pandemic until now, the price of shrimp feed has increased many times. If shrimp is sold at a low price, farmers will suffer dramatic losses.

According to preliminary calculations by departments of Agriculture and Rural Development in provinces in the region, about 1 million tons of fertilizer and about 10,000 tons of pesticides are needed. In addition to soaring raw material prices, the fluctuation of petrol prices made farmers more worried. In that context, the agricultural sector and local governments in the region are making efforts to help farmers apply progressive production solutions to reduce the number of seeds and fertilizers.

As soon as the price of agricultural materials skyrocketed, the Ministry of Agriculture and Rural Development and the provinces and cities in the Mekong Delta urgently increased training and guidance for farmers to use fertilizers economically as well as increase production and use of organic fertilizers to gradually reduce or replace inorganic fertilizers.

Scientists and many farmers said that local administrations need to strengthen the management of wholesale fertilizer prices at material dealers, especially with a focus on commission to keep it at a moderate level. In addition, currently, thousands of rice and fruit growers have cooperated with enterprises that promised to buy all products, the price of materials provided by enterprises is usually 5 percent-15 percent lower than that of private stores. This is a good practice that needs to be replicated to reduce intermediaries at agents, help reduce input costs, and increase profits for farmers.

According to the Department of Agriculture and Rural Development of Tien Giang Province, the sector is strengthening inspections of the observance of legal regulations on the production and trading of fertilizers and pesticides to promptly detect and strictly handle cases of violations to deter people from profiteering, increasing transportation price, production, trading, use of fake, poor quality fertilizers and pesticides, and unknown origin land. Specifically, the responsible department has been strengthening sampling for monitoring the quality of fertilizer products.