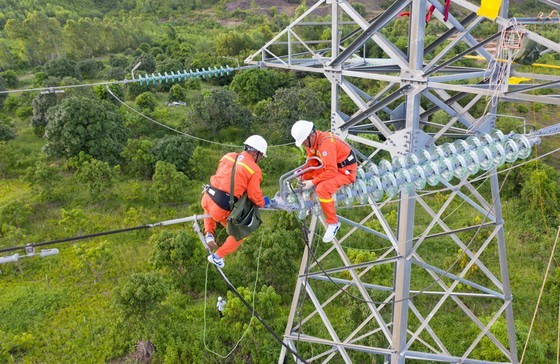 EVN said it has made efforts to cut internal costs to reduce losses in 2022. (Photo: SGGP)

EVN, on the afternoon of November 28, sent a press release saying that in 2022, the world situation has seen many fluctuations, and fuel prices have climbed highly, leading to many countries facing energy difficulties worldwide. However, EVN has performed well in its assigned tasks, ensuring a stable and safe power supply for production, business, and daily life of people with high growth in power demand, contributing to the economic growth of the country.

From the beginning of 2022, due to fluctuations in global fuel prices, the costs of electricity generation and electricity purchase of EVN increased strongly. According to fuel price movements in the first months of 2022, and based on the power system operation plan approved by the Ministry of Industry and Trade from the beginning of the year, EVN's business results in 2022 may lose up to VND64.8 trillion.

However, with the goal of minimizing as much as possible difficulties in production and business activities in 2022, EVN has drastically implemented internal solutions to save and cut costs, such as saving 10 percent of regular expenses, cutting 20-30 percent of fixed asset repair costs, temporarily paying salaries to employees equal to 80 percent of the average salary level in 2020, and strengthening the administration of electricity cost price cuts.

According to calculations, thanks to the implementation of the above solutions, EVN has strived to cut losses by about VND33.44 trillion to VND31.36 trillion.

Despite its efforts with internal solutions, due to the sharp increase in the cost of input power, the production and business results of EVN in the first ten months of 2022 have lost roughly VND15.76 trillion.

EVN said that with such a financial situation, there would be many difficulties in the following years, such as not being able to balance the cash flow to pay the cost of buying electricity to power generation units, affecting the ability to operate continuously power plants, and thus, affecting the power supply assurance plan.

At the same time, it also faces difficulties to mobilize and balance capital to invest in power projects and repairing and maintaining power projects to ensure electricity supply.

According to the forecast, the world fuel price in 2023 has no tendency to decrease to the average level in 2021, so EVN is expected to continue to encounter many difficulties in production and business activities, and financial balance in 2023.

“In 2023, it is expected that global fuel prices will remain at a high level, and the foreign exchange rate has continuously advanced over the past time. Moreover, the proportion of low-cost power sources, such as hydroelectricity, tends to decrease while that of high-cost power sources increases," EVN said.

In this difficult context, EVN said it would continue to make efforts to overcome difficulties to ensure power supply for the country's socio-economic development.