At the meeting, enterprises said that the preparation of goods was smooth and on schedule. However, enterprises are concerned that the purchasing power at the peak of Tet holidays this year will not increase as high as expected because consumers cut down on spending due to the impact of Covid-19.

Mr. Nguyen Vu Toan, Deputy General Director of Saigon Co-op, said that this year, Saigon Co.op prepared goods with a worth of more than VND4.92 trillion, up nearly 20 percent compared to the same period last year. Of which, nearly 40 percent of the capital source is for nine groups of essential goods covered by the price stabilization program, including rice, sugar, cooking oil, pork, poultry meat, poultry eggs, processed foods, vegetables, fruits, and seafood. The remaining 60 percent is for other food and non-food items. Saigon Co-op plans to increase the frequency of quality control of goods by 5 to 10 times higher than ordinary months, especially the group of food products for the Lunar New Year.

At this time, Saigon Co-op simultaneously reduces its prices early to help consumers to shop thriftily and prevent the situation that shopping demand cumulates at the year’s end. During the days near the Lunar New Year, consumers only need to buy fresh foods or order processed dishes from supermarkets, convenient and time-saving. The distributor will also carry out a series of direct discount programs of up to 50 percent for thousands of products for the Tet holidays. And during ten days before the Lunar New Year, it will continue to lower prices further to stimulate consumer demand.

Saigon Trading Group (Satra) said that it was also focusing on preparing more than 2,421 tons of key products, such as rice, processed food, and cattle meat, to stabilize the market during Tet holidays, an increase of 63 percent compared to ordinary months and 43 percent compared to the plan assigned by the city, equivalent to the capital level of VND277 billion.

Of which, pork reaches 2,142 tons; the remaining products, including rice, processed foods, and fish sauce, are nearly 300 tons. Moreover, Satra's retail network also prepares a plan to source and reserve goods with a value of about VND526 billion, an increase of 13 percent, to ensure supply safety for the Tet market. 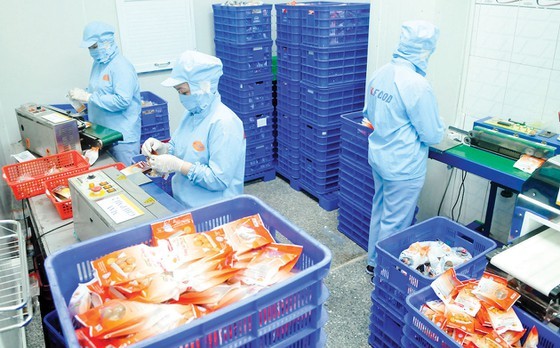 Mr. Nguyen Phuc Khoa, Deputy General Director of Satra, said that the new point in Tet goods preparation this year is that Satra focuses on food safety inspections. In which, inspection will be enhanced from the root and the beginning, including items that are already on the shelves. Besides, Satra also increases stockpiles of products for Covid-19 prevention and extends service times by three to four hours from February 1, 2021, or the 20th day of the twelfth month in the lunar calendar.

The price of pork has been stable because pig repopulation has been done quite well domestically, and the amount of imported frozen meat has arrived fully in cold stores of Satra. According to Mr. Khoa, the price of frozen pork imported from Russia was up to VND128,000 per kilogram in the past, but now it has decreased sharply to only around VND70,000 per kilogram. Satra will actively present more frozen pork products, with packaging sizes from 2 to 3 kilograms, to the market in case pork products heavily attract customers. On the other hand, Satra and its member companies will add about 20 new products, such as seasoned meat and spring rolls, to best serve the shopping needs of people during the Tet holidays.

Similarly, Saigon Co-op has prepared 3,500 tons of safe pork at lower prices than the market from large suppliers, namely Vissan, CP, Anh Hoang Thy, Meat Ha Nam, Nam Phong, and Feddy, so consumers should not worry about pork. Besides, Saigon Co-op also prepares a large amount of beef, poultry meat, and seafood and offers discounts in turn for consumers to have more choices.

Regarding purchasing power, most enterprises concern that at this time, the purchasing power not only has not increased yet but also decreased slightly over the same period. Even orders for Tet gift baskets have not shown any positive signs. To boost demand, enterprises will continuously run discount programs for a wide range of essential goods, develop more sales network for Tet goods, strengthen linkage with partners, namely Grab, Baemin, Now, and Sen Do, to sell products online and increase coverage of Tet products. They will also offer more utilities for customers, such as door-to-door delivery and free gift-wrapping, and strengthen mobile sales trips to remote and rural areas, creating conditions for people to buy Tet goods.