Tenth grader Nguyen Duy An at International Horizon School who has just won the scholarship shared that he was selected for the scholarship based on his academic excellence and good English skills and community activities. 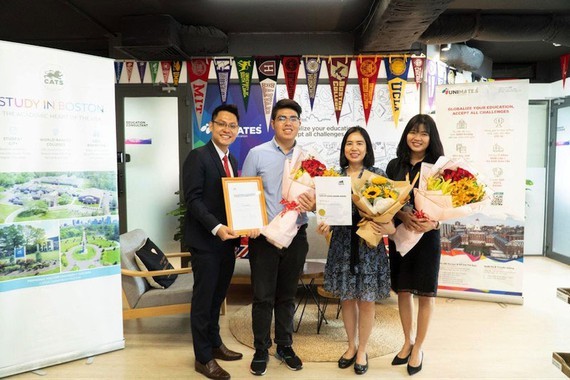 Student Duy An ( second, L) at the scholarship-giving ceremony
Student An has scored good academic performance in nine consecutive years and a band IELTS score of 7.0. Duy An also grasped two silver medals and two bronze medals at International Math Challenge in Bangkok.
Moreover, he captured a bronze medal at an online international Olympia and the third prize of the city competition in 2019. Additionally, he earned 10 medals at the World Scholars Cup in the same year. He has taken part in various community activities at the age of 11.
Students may apply after one semester at CATS Academy Boston, and are selected based on academic excellence, passion for learning, and understanding of the importance of service.