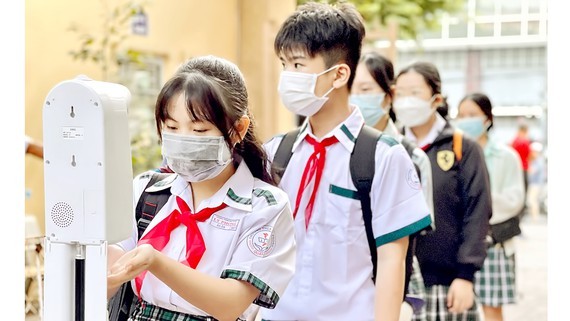 Checking temperature at Ly Phong school in District 5 (Photo: SGGP)
The Ministry of Education and Training (MoET), Ministry of Health (MoH) together with municipal and provincial authorities are determined to re-open schools no later than February 14, said Deputy Minister of Education and Training Ngo Thi Minh.
During a meeting chaired by Deputy Prime Minister Vu Duc Dam in Hanoi on January 24, Minh said 14 localities nationwide have so far allowed in-person learning, 30 others combined both online and offline learning, and 19 others offered lessons online or via television. As scheduled on February 7, 35 more localities will re-open schools, bringing the total to 49 while 14 others will do the same on February 12.
At the event, Deputy Minister of Culture, Sports and Tourism Doan Van Viet also suggested resuming tourism activities from May 1.
Under a pilot plan to welcome foreign tourists in the first stage from November 2021, as many as 8,500 visitors, mostly from Russia, the Republic of Korea and Singapore, were served as of January 23.
Agreeing with the Ministry of Culture, Sports and Tourism (MoCST)'s proposal to reboot tourism activities from May 1, Deputy Minister of Health Nguyen Truong Son said the Health Ministry issued the Decision No.5772/QD-BYT on the process of issuing vaccine passport but it still needs counselling from the Ministry of Public Security, Ministry of Foreign Affairs and the Ministry of Culture, Sports and Tourism to control the entry of the Omicron variant to Vietnam.
Opinions at the event suggested the MoH issue a new guideline on the level of the pandemic to that localities could adopt suitable measures when schools or tourism activities resume.
Others said children aged 5-11 should be allowed to go to school without conditions on vaccination. The MoET and MoH should direct localities prepare for plans to deal with infections at schools.
Representatives from ministries and agencies proposed arranging more flights to carry overseas Vietnamese home in line with pandemic prevention and control regulations.
The MoCST was also urged to actively expand the pilot scheme to welcome foreigners if conditions allow, including extending their stay or taking them to areas where residents have been given the third vaccine shots.