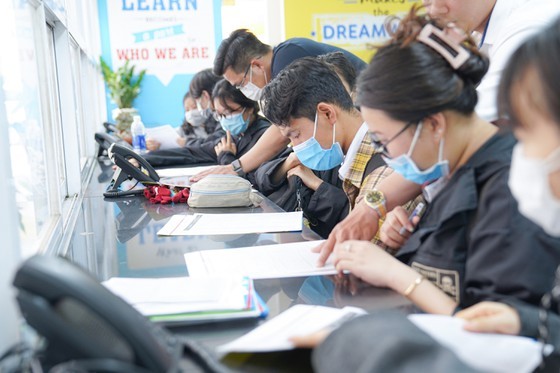 Professor Vu Hai Quan, President of Vietnam National University in Ho Chi Minh City, said that the National University Council has decided to be autonomous with the three above-mentioned universities and will implement it from 2021. In the decision of autonomy, the University Council Ho Chi Minh City also approved the adjusted tuition fee according to the roadmap starting from the enrollment course in 2021. That means new students will pay tuition fees according to the new course, while the old students will still apply the old tuition rate under Decree 86.
Assoc. Professor Bui Hoai Thang, Head of the Training Department of the University of Science and Technology, said that according to the autonomous decision, the tuition fee for new students in 2021 will be VND25 million per year. For students of old courses, the tuition fee will be applied according to Decree 86; for instance, in 2021, it will be VND11.7 million yearly.
In comparison, the tuition fee when implementing autonomy is much higher than the tuition fee as per Decree 86. However, for students majoring in engineering and technology, the tuition fee of VND25 million a year is not enough with the current training costs. The actual cost of training for students of the school must be about VND60 million- VND70 million a year, Assoc. Professor Bui Hoai Thang said.
For the University of Economics and Law, new students in 2021 will have 2 tuition fee rates. For those majoring in International Economics, International Business, and E-commerce, the tuition fee is VND20.5 million per year with the remaining subjects is VND18.5 million a year. For the following years, it will be adjusted up by no more than 10 percent according to the committed schedule in the decision on autonomy. The old tuition fee according to Decree 86 is VND9.8 million annually.
Meanwhile, the University of Information Technology announced the tuition fee in 2021 will be VND25 million, the following years will increase by VND30 million in 2022 and VND35 million in 2023 respectively and VND42 million in 2024. For students of the old courses, the tuition fee will be applied according to Decree 86 and will be adjusted when there is a new decree of the Government.
In order to share difficulties with parents and students amid the spread of the Covid-19 epidemic, the Ministry of Education and Training has sent an official dispatch to ministries, agencies, people's committees of provinces, cities and educational institutions on maintaining tuition fees for the 2021-2022 school year.
In 2021, tuition fees of public schools that have not yet autonomously increased to the ceiling according to Decree 86. Accordingly, the tuition ceiling for mass training programs at non-autonomous schools such as Social Science, Economics, Law, Agriculture - Forestry, Fisheries is VND9.8 million a year; Natural Science, Engineering, Technology, Physical Education, Sports, Art, Hotel, Tourism VND11.7 million a year; Medicine and Pharmacy sector VND14.3 million a year. For postgraduate training, tuition fees also increase; for example, a Master's degree is increased by 1.5 times compared to university and doctoral level is 2.5 times higher than university level.
While the Covid-19 epidemic has been attacking many localities in the country, an increase in tuition fees will cause many difficulties for poor students. However, many schools have now decided on many policies to support learners in the new school year. Dr. Phan Hong Hai, Rector of Ho Chi Minh City University of Industry, said that the school has many scholarships to support students. Freshmen in 2021 can apply for exemption from tuition fees throughout the year. In addition, the school will also spend VND60 billion to set up a scholarship fund to encourage learning and support students.
Professor-Dr. Nguyen Dong Phong, Chairman of the Council of the University of Economics Ho Chi Minh City, said that the school has launched a student support package worth VND25 billion with a program to reduce tuition fees by 5 percent in the middle and last semesters of 2021 and 1,000 scholarships to support students affected by the Covid-19 epidemic. This support package is for learners of all majors. Other public schools also followed suit to spend up to several tens of billions of dong in scholarships and a five percent reduction in tuition fees for new students in 2021.