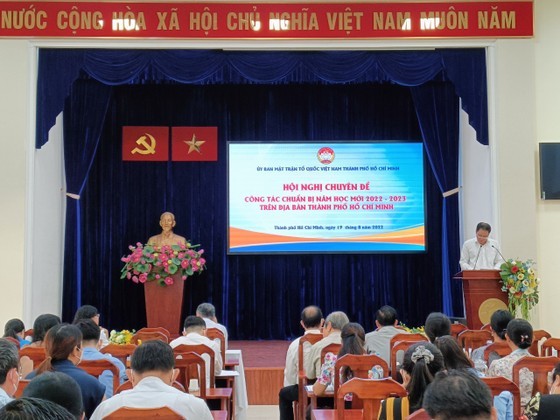 The Vietnam Fatherland Front Committee in HCMC  holds a meeting on the preparation of the new school year 2022-2023
Speaking at the meeting this morning held by the Vietnam Fatherland Front Committee in HCMC on the preparation of the new school year 2022-2023, Mr. Nguyen Thanh Trung, Standing Vice Chairman of the Vietnam Fatherland Front Committee of Ho Chi Minh City, announced the results of parents ideas in an online survey.
Mr. Trung said that currently, some districts in the southern largest city have more classrooms than their needs whereas other districts are short of classrooms. According to him, the results of a random online survey of 28,347 parents showed that the majority of parents appreciated the present tuition fee policy, the implementation of the admission procedure at the beginning of the year, the educational environment, and the curriculum.
However, 6.6 percent of parents complained that donations and purchases of school supplies at the beginning of the school year in addition to tuition fees are massive while 8.2 percent said that exams and evaluations can exert stressful pressure on students and the impact a content-heavy curriculum might have on learning outcomes and assessment; thus, students have little time for extracurricular activities and life skills. Especially, 14.4 percent of parents suggested paying more attention to upgrading school facilities, especially toilets and canteens, and function rooms to meet students' learning needs.
Mr. Nguyen Thanh Trung said that the survey results were recorded in many localities due to the pressure of increasing mechanical population, the number of students increased higher than the school year 2021 - 2022, so many students can’t learn two shifts a day.
Plus, the construction of schools has not kept pace with the number of students and the education sector has bumped into difficulties in recruiting specialized teachers such as English, Music, and Fine Arts because there are no applicants. 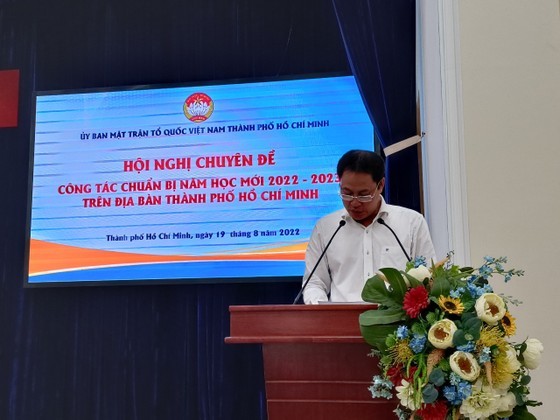 Nguyen Thanh Trung, Standing Vice Chairman of the Vietnam Fatherland Front Committee of Ho Chi Minh City
Previously, the Standing Committee of the Vietnam Fatherland Front Committee in Ho Chi Minh City coordinated with the city Department of Education and Training carried out an investigation on the preparation for the new school year in districts 11, 12, Binh Tan and Nha Be.
In order to reduce the pressure on public schools, some localities such as Binh Tan District have called for social contributions and created favorable conditions for non- public schools’ development to offer more seats in schools for children.