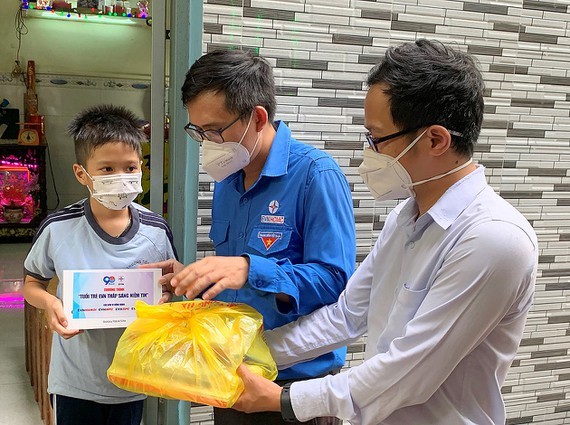 Vo Minh Tan receives tablet and gifts
It is even more difficult when they do not have the studying device for online learning. Sympathizing with disadvantaged children, many departments and benefactors have joined hands to support online learning facilities for orphaned students in Ho Chi Minh City.
Second grader Ly Thai Tai in Ward 15 in Binh Thanh District expressed his joy while receiving a smartphone from a district leader saying that now he can attend online classes with his friends.
Tran Thi Bay, Tai's grandmother disclosed because he doesn’t have the equipment, Tai has not been able to attend school with his friends since the beginning of the school year. She sadly said that prior, she could afford books and other studying devices; however, she has been short of money this school year when students must learn on the internet; therefore, she can’t afford a smartphone.
The boy kept asking, so she had no choice but told lies to her grandson that the boy should wait until the social distancing mandates were over, though she understood that she couldn't afford a smartphone for him.
Tai’s mother left him a long time ago while his father with mental illness had gone somewhere and Tai lived with his grandmother. When she was still healthy, she worked as a domestic helper to earn money to support her grandchildren.
Now she grows old and weak, she hardly does the old job to earn money. Her old landlord sympathizes with their situation so the landlord has not collected rent for months. They don’t have money for meals not to mention education and Mrs. Bay was helpless to see her child's lack of education.
Receiving a tablet from the Youth Union of the Electricity Corporation of Ho Chi Minh City (EVNHCMC), third grader Vo Minh Tan in HCMC’s District 4 burst into tears, saying he missed his mother who died of Covid-19 because his mother promised to shop with him to buy a new bag for the new school year in the summer break. Tears were in his eyes and as he raised one limp hand to wipe away the tears.
Ba Tan lost his ability to work, so he took his wife and son to his hometown. Two months ago, Tan's mother died of Covid-19. Tan, therefore, had to rely on his cousin who was unemployed because of the pandemic, so her family life fell into a difficult situation.
EVNHCMC Youth Union has coordinated with other units, through the program "Accompanying children to school" to take care of orphans and disadvantaged students. They have been giving away 60 online learning devices and more than 250 gifts comprised of studying items and a scholarship.
Secretary of the EVNHCMC Youth Union Huynh Tan Khuong said that the Covid-19 epidemic has caused many families to be separated, and more than 1,500 children have been orphaned. The program aims to help children overcome their daily difficulties for a better future.
Party Chief of Binh Thanh District Vu Ngoc Tuat was moved at children’s losses while handing studying items to them.
Tran Anh Kiet, Head of Education and Training Department of Binh Thanh District, at the beginning of this school year, the whole district had 826 students lacking learning equipment.
The district has mobilized benefactors and parents of students from schools to donate tablets, smartphones, 3G sim cards to 432 children. Determined not to let students drop out of schools due to lack of learning conditions, the district continues to mobilize all social resources to promptly equip online learning equipment for difficult students.
Administrators of Thu Duc City in coordination with the Vietnam Fatherland Front Committee of Thu Duc City have jointly given support to students from poor households, near-poor households, and disadvantaged households, especially those whose fathers, mothers and relatives died due to the Covid-19 epidemic by launching the program "Internet connection and computers for students".
Previously, the Department of Education and Training of Thu Duc City also launched the program "ATM electronic devices for online learning" throughout the industry. With the cooperation of benefactors and businesses, Thu Duc City gave 2,125 learning devices and 1,100 5G sim cards to students for virtual learning.