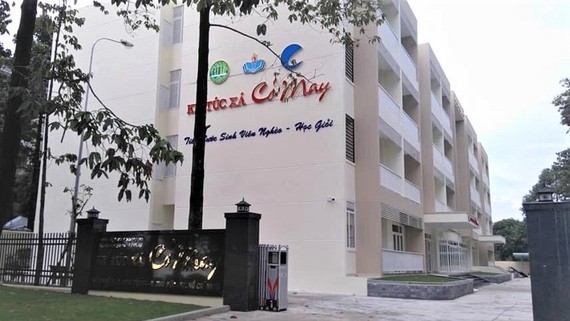 Co May student dormitory
Deputy Director of the Vietnam National University Development Fund Associate Professor Nguyen Dinh Tu in Ho Chi Minh City said that in the past time, about VND 300 billion was given to the fund by many businesses and localities for investment in facilities and equipment.
Of VND300 billion, approximately VND200 billion was used for construction of universities while hundreds of billion Vietnam dong was poured into building student dormitories and the remaining was for the purchase of devices, laboratories.
Professor Tran Thanh Van and his wife Professor Le Kim Ngoc are sponsors of scientific and educational events in the country. In 1993, the Meeting Vietnam science conference was introduced thanks to the professor and his wife’s passion for science and a deep love for Vietnam.
Since then, 15 the scientific conferences “Rencontres du Vietnam” (Meeting Vietnam) have been organized in Vietnam, attracting thousands of world-renowned scientists including Nobel laureates to the Southeast Asian country to attend and do teaching profession.
Under the auspices of the Meeting Vietnam program, the couple also set up and granted the Vallet scholarships every year to poor students and those who’ve performed well in their studies. So far, more than 30,000 scholarships with nearly VND400 billion (US$17,586,954 ) awarded to over 30,000 Vietnamese students nationwide. The program’s biggest success is that it has collaborated with French professors to train more than 1,500 teachers according to the method "La main à la pate".
Five years ago, under the auspices of late businessman Pham Van Ben, an owner of Co May Private Enterprise in the Mekong Delta Province of Dong Thap, Co May student dormitory was built at nearly VND40 billion aiming to provide good accommodation for poor students to help them overcome their shelter difficulties. Around 600 students who have been granted scholarships annually are residing in the Co May dormitory gratis.
Dr. Tran Dinh Ly, Vice President of Ho Chi Minh City University of Agriculture and Forestry, said that universities and their investors need to work with Vietnamese great benefactors to ensure that donations or money will be given to students transparently. On the other hand, in order to attract funding, it is certain that the goals of the parties must be ensured. Moreover, universities must maintain and build their reputation.
In developed countries, public universities, as well as private universities, have received a lot of donations and huge funding, some schools have received tens of billions of dollars for the national interest. However, sponsorship and donation are available at public universities while donors have rarely given money to private universities which are owned by businesses and operated as a business, said the professor.
According to current regulations, experts said, there are provisions on tax exemption and reduction for grants, donations and donations to education, which overlap and are unclear. Therefore, in addition to the effort to improve the quality and reputation of universities, the system of legal documents also needs to be clear and transparent to facilitate individuals and sponsors for universities.