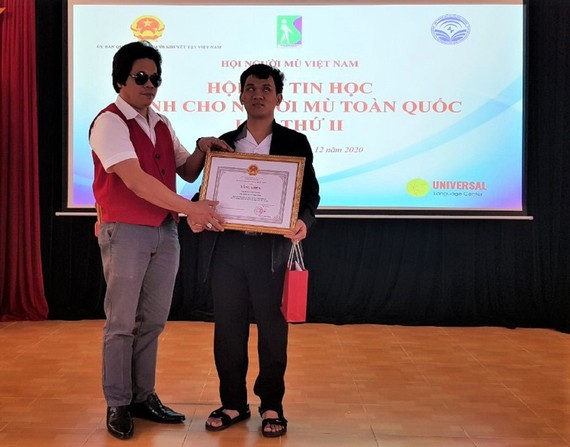 Thom is presented a certificate of merit (Photo: SGGP)
In the school year 2021, two brothers Dao Van Thom born in 1996 and Dao Tan Thao born in 2003 from the Central Province of Binh Dinh became students of Van Hien University. Totally blind Thom majors in the piano faculty, and Thao with 2/10 eyesight decided to pursue the information technology industry as he loves this.
Their family with six members but only their father and sister have good vision. They often experienced difficulties coping with the demands of daily life but they were always happy for love is in the air in the family. Their mother is a housewife while the father works to support the family.
Thom still keeps his childhood memories with beautiful images of school days with his friend before the age of 10, when her eyes were still bright. When he was fifth grader, Thom's eyes began to fade. When the charity group arrived at the locality, Thom registered for surgery but the operation was not as good as expectation.
Thom has dropped out of the school since then. He gradually got acquainted with the life of the blind and he had been so bad-tempered because of daily difficulties.
In March 2011, feeling sorry for his blindness, the aunt decided to bring him to Ho Chi Minh City while returning to BInh Dinh Province. She was also looking for a school for him in Ho Chi Minh City.
In May 2011, a blind teacher named Nguyen Quoc Phong, a founder of Thien An Shelter in HCMC’s Tan Phu District accepted Thom in the shelter helping him learn essential life skills.
After three years, Thom sat for an exam at a primary school in Ho Chi Minh City. In 2014, teacher Phong still let Thom and his brother stay in the shelter to continue pursuing the sixth grade at the Center for Continuing Education in Tan Phu District. Since then, Thom and Thao attended the same school.
Thom said he loved music when he was a little boy and loved playing the piano. At the age of 18, because he was too fond of the guitar, Thom's mother sold a cow to buy him a musical instrument at the price of VND18 million. His mother said despite of the family’s poverty, she would try to buy the musical instrument for him as he wanted to study. His mother’s words have motivated Thom and Thao to pursue their passion since then. Therefore, Thom and Thao both achieved excellent academic results in the high school.
Both of them feel grateful to their family and Thien An shelter - their second home, for helping the two brothers continue their studies until now. Under the guidance of teachers, sisters and nuns in Thien An shelter, Thom and Thao have gradually known how to clean the house and how to cook.
After knowing the two men’s strong will in life, the Hung Hau Heart Fund of Van Hien University decided to award full scholarships and one laptop to Thom. Thao was given a 50 percent scholarship of the course fee and one laptop. Thom and Thao are two of many blind students studying at Van Hien University who are supported with tuition fees and learning materials.
Bereaved small girl Lam Thi Thanh Hien lost her father in August, 2021 when Vietnam was hit by the fourth wave of Covid-19. After her father’s death, she and her stepmother fell into difficulties. They are living in a 20-sq.m house in a small alley in Pham Phu Thu Street in District 6. It seemed that she had to stop education after her father – the family breadwinner – died. However, with her strong will, she tried hard to pursue her higher education thanks to the scholarship of the International College.
Principal of Ho Chi Minh City International College Nguyen Dang Ly said after the school managers understood Hien's family condition, they decided to grant her a full scholarship to help her complete the course. After graduation, the school will also give more money for her continued education as the school’s Covid-19 scholarship aims to nurture the future of students with extremely difficulties.
Currently, universities and colleges have had various financial support for needy students and freshmen affected by the impacts of the Covid-19 epidemic. In addition to the exemption and reduction of tuition fees, many schools also offer scholarships for the whole course and living expenses. Schools also cooperate with businesses and partners to give gifts and scholarships to motivate students in their pursuit of education.