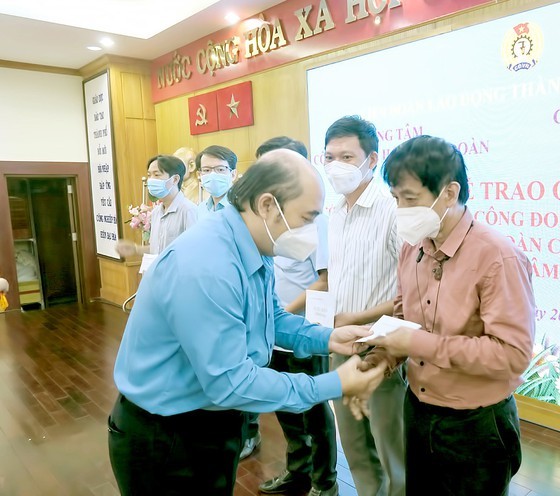 A representative of the Education Sector's Trade Union gives gifts to teachers (Photo: SGGP)
This is one of the activities that show affection, aiming to give more motivation to teachers who have dedicated themselves to the teaching profession.
Young teacher Nguyen Thi Tuyet Ngan at Ly Nhon Primary School in District 4 will never forget the 2022 New Year when Her husband died at the time of the Covid-19 outbreak while their son had just turned four months old. The young mother was alone in the burden of raising her child and taking care of the burial ceremony of her husband.
She remembered that the husband left suddenly after a few days of illness. The son was too young, so she told herself to be strong to go through a tough time to take care of the son. Now, although she has lost her companion, her son has become the driving force to help Ngan overcome all difficulties and hardships.
To support her, the Trade Union of the city's Education Sector gave her a savings book worth VND5 million.
With the happy feeling at receiving VND5 million from the Union, teacher Hoang Anh Quoc, formerly a supervisor and vocational teacher at Ernst Thalmann High School in District 1 said that the money is just enough to cover his cost of dialysis and medication for a month. In 2019, when he discovered that he had chronic kidney failure, Mr. Anh continued to work at Ernst Thalmann High School.
However, after three months, he had to stop working without choices because he has spent more time visiting the hospital and his eyesight rapidly decreased due to the influence of the disease. His medical treatment cost, the tuition fee of their two children are all resting on his shoulders. Currently, a week, Mr. Quoc has to go to the hospital for dialysis three times, costing VND5 million-VND7 million a month.
He said that even though he has been out of work for nearly two years, every year on the occasion of the new year, his former colleagues visit him making him feel warm.
Sharing about a year full of difficulties and fluctuations and welcoming the coming spring full of hope, teacher Nguyen Duc Thang, a teacher at Ly Tu Trong College in Ho Chi Minh City, said that Tet gifts not only have material value but they are also an invaluable spiritual medicine that helps him overcome difficulties and diseases for dedication himself to the teaching profession.
In the days approaching Tet, officials and teachers in Thanh An island commune in outlying district Can Gio enjoy the newly repaired and renovated public office which the city Education Sector’s Trade Union has made as a gift for teachers in Thanh An island commune.
Being one of the first teachers in the island commune, Nguyen Thi Ngoc, a teacher at Thanh An Middle School and High School, said that the teacher dormitory was built more than 10 years ago. Now it's degraded; thereby, it's flooded when it rains. Teachers are very happy to live in the new dormitory.
Chairwoman of the city Education Sector's Trade Union Nguyen Thi Gai said that Thanh An island commune is one of the most difficult working areas in Ho Chi Minh City.
Most of the students in the island commune whose fathers are fishermen with meager income are from poor families; thus, they have never enjoyed the spring festival. With their love for the teaching profession, the teachers stayed here with the hope to lift poor students out of poverty.
In addition to the newly upgraded building, the city's Education Trade Union also presented nearly 200 Tet gifts to officials, teachers, employees working in Thanh An island commune, and teachers in difficult circumstances.
The gifts are contributions of teachers citywide to their colleagues in suburban districts to help their peers overcome daily difficulties and challenges.