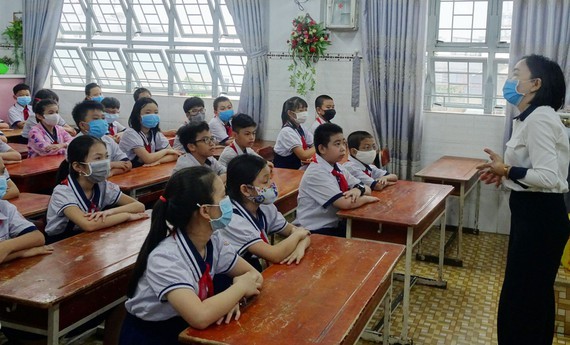 Different enrollment options in HCMC amid Covid-19 epidemic spread
While the inner city districts are relatively stable in terms of planning, enrollment is forecasted to be more volatile in the suburban districts due to the influence of population distribution.

Ngo Van Tuyen, Head of Education and Training Department of Binh Tan District, said that according to the population census, 11,000 kids will enter grade 1 in the school year 2021-2022 in the district, equivalent to the number of first graders last year.
However, this year due to the impact of the Covid-19 epidemic, the actual number of students enrolled is expected to fluctuate in the coming months. Currently, pre-schools, primary schools and junior high schools in the area have stopped accepting face-to-face applications, but online applications for enrollments of 5-year-old kindergarten, first and sixth grades instead.
As of the end of last week, the district had more than 8,000 first graders completing their online enrollment documents. Particularly, secondary schools received about 5,800 online enrollment applications of fifth graders registering sixth grade have been completed out of a total of 7,800 students expected to enter sixth grade, a rate of more than 74 percent.
addition, the district also receives about 1,000 students who have household registration in Binh Tan District but completed the 5th grade program in other districts, now wish to study in grade 6 in the district every year. He affirmed to have enough seats in classrooms for all students.
In District 12, Head of Education and Training Department Khuu Manh Hung said that enrollment for grade 6 has been completed, while the number of online enrollment applications for first grade has reached more than 70 percent.
Apart from that, preschools are impossible to deploy online enrollment due to a large number of independent and private class groups. In cases, students have completed the online registration procedure, parents only need to bring the original documents to the school to compare the date of the student's return to school.
In the school year 2021-2022, schools in the district will admit more than 9,000 first grade.
Enrollment is forecasted to continue under pressure because the district has not constructed any new primary schools while it has put additional 20 classrooms in secondary schools into use through renovation and construction of new facilities.
The Department of Education and Training in Tan Phu District July 10 sent a notice to heads of educational institutions and the chairman of the People's Committee of 11 wards about the suspension of the enrolment plan as well as transferring plan for the school year 2021-2022 in order to strictly comply with regulations on Covid-19 prevention.
According to Tran Trong Khiem, Deputy Head of the Department of Education and Training of Tan Phu District, the district has completed the population census, updated the list and classified students in the first grades. Currently, during the implementation of social distancing under the direction of the municipal People's Committee, the enrollment is temporarily suspended.
Parents and students should follow new announcements on the website of the district Department of Education and Training. In the school year 2021-2022, Tan Phu district has no new school projects to put into use, some schools have been repaired since the beginning of June, without affecting the enrollment
Binh Chanh district sees the high annual mechanical population growth rate with more than 13 percent, so the number of additional students at all levels is more than 4,000. Nguyen Tri Dung, Head of Education and Training Department of Binh Chanh District, said Vinh Loc A and Vinh Loc B commune each has the population over 130,000 people ; therefore, the local education sector must find way to admit all students.
At the end of the school year 2020-2021, seven primary schools in the district have not yet organized two class sessions per day due to insufficient classrooms, especially communes Pham Van Hai, Vinh Loc A and Vinh Loc B. Worse, the school year 2021-2022, the percentage of students who can attend two class session per day cannot increase due to the implementation of the 2018 general education program (GDPT) in second and sixth grades.
A leader of Go Vap District Education and Training Department informed that in the 2021-2022 school year, no new schools will be put into use at all preschool, primary and secondary schools, but only adding 12 classrooms at Primary School Vo Thi Sau in Ward 16 to increase the number of seats for students. For the next school year, the district will strive to maintain the rate of students taking two lessons per day, more than 70 percent in first and sixth grades, ensuring that 68 percent of students in grades 2, 3, 4, and 5 will have seats for two classroom sessions.
Particularly in District 12, in the 2020-2021 school year, the rate of first graders who can study two classroom sessions per day is just over 38 percent. The district must continue to prioritize classrooms for second grade students to implement the 2018 GDPT program, so it is forecast that the rate of two classroom session per day will be lower than the previous school year.
Ngo Quyen Primary School in Binh Tan District’s Binh Hung Hoa B Ward is currently the unit capable of receiving the largest number of students with 20 classes for first grades and 74 classes for second, third, fourth and fifth grades.
To implement the 2018 GDPT program, the district will not reduce the number of semi-boarding classes for third, fourth and fifth grades but decide to organize more than five classroom session per week to ensure seats for all students. It is expected that the rate of students in first and second grades who have two classroom sessions per day will remain at 60 percent, while the remaining grades will be around 30 percent.
In the school year 2021-2022, Luong The Vinh Primary School in An Lac A Ward with 300 classrooms will admit students. Currently, due to the impact of the epidemic, the construction progress is expected to be completed by the end of September 2021. Enrollment is still underway, students are arranged to study temporarily at a nearby institution, when the school is handed over, they will move back to study at the new campus.