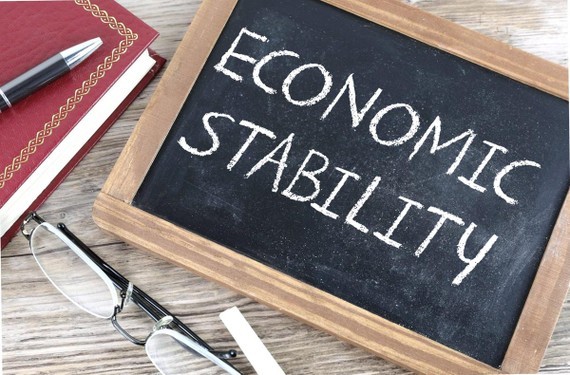 Banks have tightened  credit room and the risk of bad debts is worsening. Since it is difficult for businesses to access capital, interest rates are increasing and capital mobilization from corporate bonds has slowed down after a spate of unfortunate recent incidents. In a talk with Saigon Investment, Dr. Nguyen Tri Hieu, a banking and financial expert, analyzed many of these issues.

JOURNALIST: - Sir, many people think that Vietnam's economy is quite stable at the macro level in the current scenario. What is your opinion on this?

Dr. Nguyen Tri Hieu: - In the first half of 2022, Vietnam's economy in terms of the macro was relatively stable, and showed signs of coming out of the drastic Covid-19 pandemic phase. Businesses were starting to recover, and inflation was also quite low. However, in the second half of 2022, global economic fluctuation affected the economy in Vietnam very strongly.

Specifically, the economy has been affected more after the US Federal Reserve (FED) raised the interest rate six times in quick succession in 2022. This directly affected the Vietnamese stock market and put great pressure on the foreign currency market as well. The exchange rate then started to increase in the second quarter. Under these circumstances, the State Bank of Vietnam increased the operating interest rate two times in September and October. The ceiling interest rate for deposits under six months was also raised and the US dollar to Vietnam dong exchange rate band was widened to fend off the bad impact from the world financial markets.

In the third quarter, the domestic economic situation was strongly influenced by the global economy. This is to say that Vietnam's economy has stabilized, but macro is putting it too optimistically. Internal factors in Vietnam's economy may remain stable, as controlling inflation or controlling gasoline prices requires all measures of monetary policy. However, the pressure of interest rate increase from the FED is getting stronger day by day, forcing Vietnam to respond by increasing the operating interest rate and widening the foreign currency trading band to deal with external and internal instability factors.

- Sir, due to a lack of liquidity, the Vietnam dong deposit rates are currently very high. Some commercial banks have mobilized at over 10 percent, while output is tightened by the State Bank of Vietnam to control inflation. Do you think this is an unstable situation? What is the source of commercial banks?

- The fact that commercial banks are raising the deposit interest rates very high, creates a risk for the banking system and the whole economy. First, let us talk about commercial banks. Output is being tightened, and there is not enough credit room to give loans, and the banks should have slowed down in mobilizing at this time, but they raised the interest rate up to 10 percent per year. It seems that banks are having liquidity problems, which may be due to bad debts that have been restrained for two years, and are now bouncing back.

Because these bad debts are blocked by not transferring debt groups, and we must have real cash flow, and this real cash flow does not return to the bank, then it is forced to mobilize with high-interest rates.

In addition, recent cases of misconduct related to corporate bond issuances by large corporations have also had a domino effect on the financial market. Because the issuance volume of real estate enterprises is very large, banks are the components that buy real estate corporate bonds a lot. Money invested in corporate bonds does not return, which also affects the liquidity of some banks. Currently, banks all report high interest, but that interest may be just on-book profit, but the main problem is real cash and whether this cash flows back to serve the businesses and return to customers is another matter altogether. The fact that the banks are constantly pushing the deposit interest rate up at this time can be seen as proof that the banks are having liquidity problems.

- Sir, the pressure on interest rates is already hot, but the pressure on corporate bonds is even hotter. The fact is that enterprises could not mobilize bonds due to a spate of unfortunate incidents in a few enterprises. There is an opinion that top leaders in management as well as experts must clear the psychology of investors. What is your opinion on this matter?

- Currently, investor sentiment is very confused. In October, businesses also stopped issuing bonds because they knew that no one buys corporate bonds. Therefore, it is necessary to recreate the trust of the corporate bonds market. At this time, in addition to the bonds of businesses involved in large cases, there are many corporate bonds that are coming into maturity between now and the end of the year and by 2023.

In such a market, issuing new corporate bonds to pay old debts is almost impossible. There are suggestions that corporate bond issuers must sell assets to repay debts when it is time to sell, but that solution is also limited. Many corporate bonds without collateral or collateral assets remain unfinished projects with no market value, so they are difficult to sell off.

This is a very extreme measure because according to regulations, corporate bonds are self-borrowing and self-paid, like a civil contract where the Government does not intervene. But this is a special situation and not coming to the rescue now will lead to mass defaults. However, this deferral program must come with strict conditions.

For corporate bonds to be issued at this time, it is best for businesses to go to the bank and ask the bank for a guarantee. If the bank does not provide a guarantee, the possibility of issuance is very low, because at this time, for investors to trust, at least there must be a guarantee from the bank or a good credit rating to show investors that the issuing company has the ability to repay the debt.

- Sir, the difficulty for businesses, especially real estate businesses, is that they only rely on capital from banks and customers. When a project freezes, bad debts explode. In your opinion, what will the bad debt situation be like in the coming years?

When corporate bonds are in crisis, businesses return to banks, and the bank doors are closed. Even current investment funds do not accept. All doors are closed, and this phenomenon causes businesses a lot of damage, as they no longer have capital and cannot run projects, especially real estate enterprises. But banks also have their problems. The bank is a big investor in corporate bonds, and when the real estate market freezes the bank falls into a bad debt situation.

I think this is a very expensive price to pay, but this difficulty forces banks and businesses to review their financial plans. More broadly speaking, the market will have to adjust for the better.

- Sir, in your opinion, what will the economy be like in 2022 and 2023 when the current complexities are analyzed but not removed?

- Let us suppose that in 2023 banks run out of money, businesses also run short of money, and the whole economy also has very little money. The State Bank of Vietnam can then print money. However, the printing of money is dangerous in that it will certainly increase inflation. Therefore, the problem is that the State Bank of Vietnam will have to consider creating liquidity for banks, in small sufficient doses so as not to increase inflation. When banks have money, they lend to the economy. Here I want to say that inflation according to the General Statistics Office data is below 4 percent, but in fact, inflation increased much more than that.

Under the current pressure, the State Bank of Vietnam may have to raise the exchange rate because the demand for buying US dollars is very huge, allowing the US dollar to appreciate and slow down the demand to buy US dollars. Hopefully, when the world situation stabilizes, the FED will not raise interest rates anymore, in which case Vietnam will be less pressured to raise interest rates and exchange rates. The economy of a country can be compared to a human body, and that body will adapt to all actual conditions. Under circumstances where there is a lack of capital, all sectors of the economy will have to adjust, lower needs if they are individuals, and produce less if they are enterprises.

I believe that the main managers of the economy like the Ministry of Finance and the State Bank of Vietnam must use all the tools of monetary policy and fiscal policy to operate, and gradually self-regulate the economic sectors. This may take time and some people will have to tighten their belts, spend less, import fewer goods, and use exports to get more foreign currency to adapt to the new economic environment.