Ministry does normative cost calculation for price of petrol 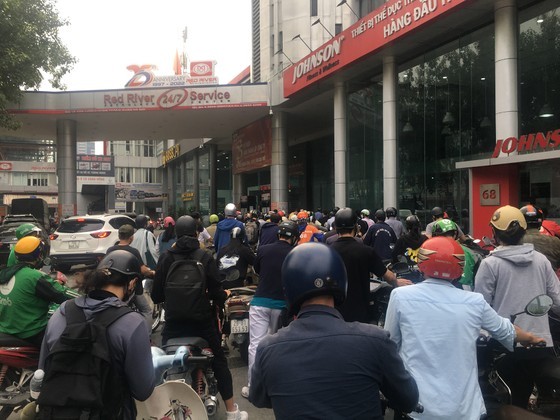 Many small fuel retail stores which don’t belong to the system of the Vietnam National Petroleum Group (Petrolimex), are still closed or staff just agreed to sell VND30,000 to each motorbike driver but they refused to sell the fuel for car drivers. Some gas filling stations announced they are running out of petrol.

Many experts said that the shortage of gasoline is real; therefore, they supposed the Ministry of Industry and Trade should raise additional import quotas for petroleum to wholesale enterprises; at the same time, the Ministry should request the State Bank of Vietnam to provide foreign currency so that wholesale enterprises can promptly import fuel for the domestic market.

On the evening of November 11, people in some districts in Ho Chi Minh City were still waiting in line for their turn to fill up their vehicles, even though the price of petrol was raised at 3 p.m. on the same day. Mr. Ngoc Hung, who lives in HCMC’s District 7, said he had just filled up with petrol at Hiep Que gas station in Tran Xuan Soan Street where people were still queuing up to wait for their turn as before when the price of gasoline has not increased.

Similarly, some gas stations at Ly Thai To roundabout in District 10, Quang Trung Street in Go Vap District, and To Ky in District 12 were also quite crowded with drivers. All gas stations have barricades available to prevent jostling.

According to some businesses, they are still suffering losses with the new price, so drivers still wait in line for their turn to fill their vehicles.

In the afternoon of the same day, the Ho Chi Minh City Department of Industry and Trade sent a document to the Market Surveillance Department in the city, the Ho Chi Minh City Police, the People's Committee of Thu Duc City and districts and petroleum businesses citywide about ensuring security and safety of fire prevention and fighting and strictly comply with legal regulations in petroleum businesses.

The City Market Surveillance Department strengthened coordination in inspecting to deter people from committing violations. Tough penalties will be imposed on violators in accordance with the law in petroleum business activities, especially acts of hoarding goods resulting in scarcity of supply.

The Ho Chi Minh City Police Department directed the Police Department of Fire Prevention and Fighting, the Public Security of Thu Duc City and districts to strengthen information about fire prevention and fighting to encourage city dwellers to comply with the regulations on fire; people should not buy gasoline for storage or resale business. At the same time, police officers will strictly handle violations.