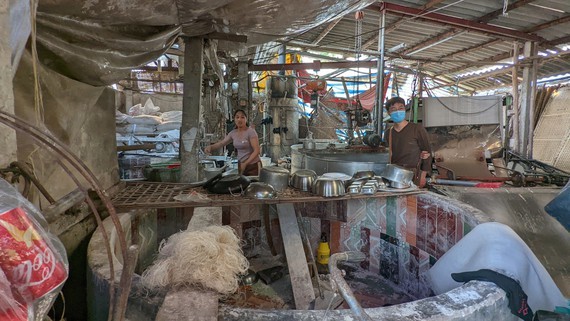 About 20 kilometers from the center of Hanoi to the West is the cluster of craft villages of Duong Lieu, Cat Que, Minh Khai, Yen So, and Dac So of Hoai Duc District. Local people are famous for producing cellophane noodles, rice noodles, cassava starch, malt, and molasses to supply to confectionery villages. The raw materials for these craft villages are edible cannas, arrowroots, and cassava roots, grown and collected from Hoa Binh, Son La, Tuyen Quang, Lao Cai, Yen Bai, and Thanh Hoa provinces.

To soak these types of tubers, most local production facilities have to build large concrete tanks, combining large and small corrugated iron barrels. After 2-3 days of soaking with many stages, the water is discharged directly into the drainage canal, from the craft villages to the field, causing pollution with a strong bad smell.

To solve the local environmental pollution, since 2012, the People's Committee of Hanoi City and Hoai Duc District and the authorities of Duong Lieu, Cat Que, and Minh Khai communes have made planning and building the Duong Lieu Commune craft village industrial cluster with a scale of 12.05 hectares to concentrate production facilities in one place so as to facilitate the collection and treatment of waste and wastewater. However, so far, the craft village industrial cluster has only attracted a few household production establishments, mainly mechanics and carpentry.

"If you want to enter the industrial cluster, each plot of land has to cost at least VND2-3 billion, not to mention the cost to build a factory. Therefore, small production households like us cannot bear such a high cost," said Le Sinh Tu, 65, owner of a cellophane noodle facility in Duong Lieu Commune.

Moreover, the most challenging part is the treatment of wastewater and waste. In Hoai Duc District, since 2013, the People's Committee of Hanoi City has approved the investment and construction policy of the Son Dong Wastewater Treatment Plant with a capacity of 8,000 cubic meters per day and night, with an investment capital of more than VND231.5 billion. The project's objective is to receive wastewater in Dac So, Yen So, Duong Lieu, and Son Dong communes and then treat it before discharging it into the Nhue River. Unfortunately, this plant is still inactive even though it has been built for many years.

However, in this industrial cluster, there are many violations related to construction. Many modern high-rise residential buildings were built instead of production facilities, and there are even restaurants and eateries there, but the local authorities only handle violations half-heartedly. The same situation happens in the craft village clusters in Tan Hoi and Lien Ha communes of Dan Phuong District. Many permanent 2-3-story houses are built quite commonly; besides, there are restaurants and eateries close to each other, instead of factories and the production activities of craft villages.

According to Mr. Mai Trong Thai, Deputy Director of the Hanoi Department of Natural Resources and Environment, the city currently has 800 craft villages, mainly engaged in agro-forestry-fishery processing, handicraft production, mechanical production, raw material processing, and services for rural production. Craft villages are creating jobs for millions of workers with stable incomes. The total revenue of craft villages is about VND22-25 trillion per year. However, accompanying the development of craft villages and craft village industrial clusters is increasing environmental pollution due to narrow premises, limited technical infrastructure and production technology, and lack of investment capital to solve environmental problems.

Back to Van Mon Commune in Yen Phong District in Bac Ninh Province, in the face of environmental pollution caused by aluminum smelters and scrap collection facilities, at the beginning of 2015, the People's Committee of Bac Ninh Province established the Man Xa craft village industrial cluster with an area of 29.6 hectares. However, up to now, only about 20 factories have been built in the Man Xa craft village industrial cluster, and the unoccupied areas have been abandoned with overgrown grass. It is extremely wasteful.

“Everyone knows that moving into an industrial cluster will make our villages and houses less polluted, but we do not know where to get the money. It costs a few billion Vietnamese dongs to build a factory in the industrial cluster. Meanwhile, in the past the investor compensated us so cheaply for the land," irritably said Nguyen Xuan Ha, 62, a resident of Man Xa craft village.

In addition, although the Man Xa craft village industrial cluster has been completed, up to now, the waste and wastewater treatment system has not been finished. Therefore, many people expressed concern about the appearance of a second Man Xa in this very industrial cluster because, according to the plan, the location of the old waste dump in Man Xa will be the place to build a station to collect slag generated from aluminum scrap recycling facilities with an area of up to 3.8 hectares. Nevertheless, the project remains on paper because site clearance has not been able to proceed.

The handling of environmental pollution in Man Xa craft village is controversial when the government encouraged local people to donate agricultural land to build a concentrated industrial cluster. However, after construction is finished, people cannot move their production facilities into the industrial cluster because of mentioned above problems.

Mr. Man Van Truyen, Secretary of the Party Committee of Van Mon Commune, said that, in the end, the locality cannot but take responsibility for that, at least in terms of propaganda to change awareness.

“People have long been used to the household production scale. When moving into an industrial cluster, they have to pay for land rent, factory construction, and many other problems. These are the barriers that make many production households, even if they actually want to move into the industrial cluster, unable to do so. In addition, the local authorities have not been drastic in handling polluting establishments," said Mr. Truyen.

Mr. Truyen added that to solve the causes of pollution in Man Xa craft village, the People's Committee of Yen Phong District has made the planning of a 3.8-hectare slag collection area invested by the district People's Committee, which is currently being built. At the same time, the district also planned an additional 3.1 hectares in the industrial cluster to treat industrial wastewater. In the coming time, if the above two waste collection and treatment areas are completed, the problems of environmental pollution in the locality can be solved.