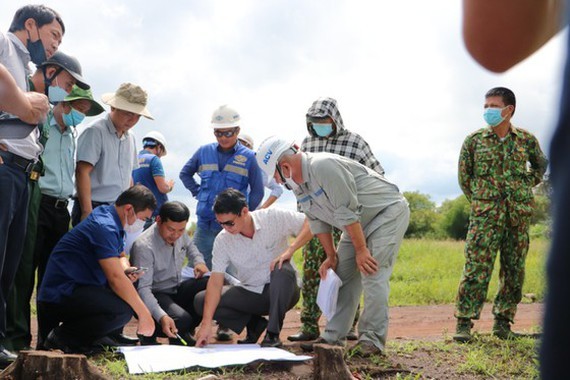 Long Thanh District has handed over 2,378 hectares out of 2,532 hectares, accounting for nearly 94 percent of the land area to serve phase 1 of the Long Thanh International Airport project. (Photo: SGGP)

The People's Committee of Long Thanh District in Dong Nai Province informed that up to now, the locality had handed over 2,378 hectares out of 2,532 hectares, accounting for nearly 94 percent of the land area to serve phase 1 of the Long Thanh International Airport project.

However, according to the commitment of the leader of Dong Nai People's Committee to Deputy Prime Minister Le Van Thanh, the province would hand over the entire site of the Long Thanh Airport construction project phase 1 in May 2022, so the above progress has not been achieved.

Thus, it will be very difficult for Deputy Prime Minister Le Van Thanh to request Dong Nai Province to hand over the entire site of the Long Thanh Airport project of about 5,000 hectares for the construction of Long Thanh Airport in June 2022.

The area has not been handed over mainly because people have not completed the construction of houses in the resettlement area of Loc An - Binh Son to move to a new place. Hence, Long Thanh District has been coordinating with the Airports Corporation of Vietnam to localize these areas. Currently, site clearance and resettlement face many difficulties, with 643 cases that have not been completed the compensation and support plans in the priority area of 2,532 hectares and 537 cases in other areas that have not been approved the compensation and support plans.

According to the schedule set by the Government, the Long Thanh Airport project phase 1 must be completed and put into operation in 2025. Up to now, two construction packages of the project have been started, including leveling the ground and drainage and installation of pile foundation for the passenger terminal.

A seminar on "Building highways and promoting the advantages of the Mekong Delta" took place on the morning of May 31 in Ho Chi Minh City.

At the seminar, Deputy Minister of Transport Nguyen Duy Lam informed that many large bridge projects have been built, smoothly connecting the banks of the Tien and Hau rivers, such as My Thuan Bridge, Vam Cong Bridge, Cao Lanh Bridge, Can Tho Bridge, and Rach Mieu Bridge. Inland waterways have completely upgraded six main waterway transport routes, connecting HCMC and the Southeast region with the Mekong Delta and phase 1 of the Cho Gao Canal. However, the Mekong Delta only has the HCMC - Trung Luong – My Thuan Expressway with 91 kilometers long.

The Mekong Delta has a fragmented terrain and weak geological foundation. The region is seriously affected by climate change and sea-level rise, so the construction investment capital is usually 1.3 - 1.5 times higher than that in other areas. As a result, it is difficult to call for socialization. Therefore, Deputy Minister Nguyen Duy Lam suggested that, besides the central budget and social resource mobilization, localities where highways pass through should prioritize and allocate local budgets for highway construction.

In the coming time, many large traffic construction projects are expected to be implemented at the same time, which will lead to a huge demand for construction materials. Therefore, localities must create conditions for building materials, especially soil and sand for the roadbed. In addition, it is necessary to have the participation of the whole political system and the support and consensus of local people in the site clearance work.