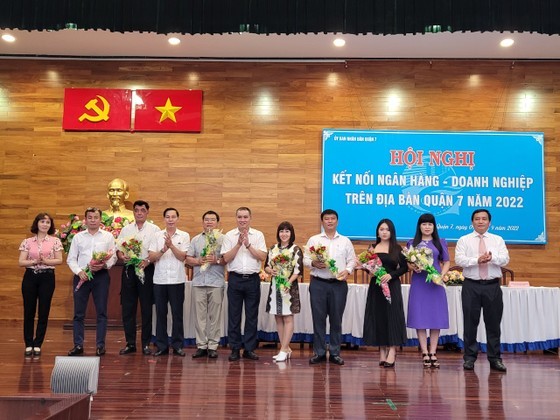 On September 9, the People's Committee of District 7 held a conference to connect banks and businesses in the district in 2022. The conference aims to find solutions to support enterprises to conveniently access financial sources with preferential interest rates to develop production and business activities.

Mr. Tran Quoc Xuan, Vice Chairman of the People's Committee of District 7, said that nearly 30,000 enterprises and business households are in operation in District 7. Of these, there are 193 enterprises in export processing zones, 14,682 enterprises outside export processing zones, and more than 14,700 business households. Total revenue of trade and services in the first six months of District 7 reached nearly VND17 trillion, up 14.8 percent over the same period in 2021. Specifically, State budget revenue reached VND3.66 trillion, achieving 98.5 percent of the yearly plan. 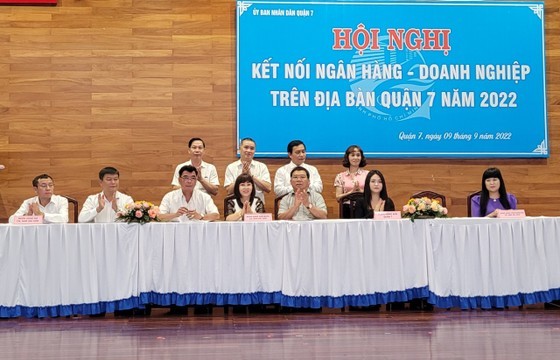 Representatives of banks and businesses sign the cooperation agreements. (Photo: SGGP)
According to Mr. Tran Quoc Xuan, the connection program helps banks to grasp the characteristics of enterprises and business households better besides supporting them. From there, they will study to shorten and simplify the order and procedures for loans and actively approach enterprises and business households to disburse loans under the Government's preferential policies, especially those in priority areas. At the event, nine enterprises representing businesses in District 7 signed new and renewed loans with commercial banks operating in the area. The total loan amount is more than VND103 billion.
By Thu Huong – Translated by Thuy Doan