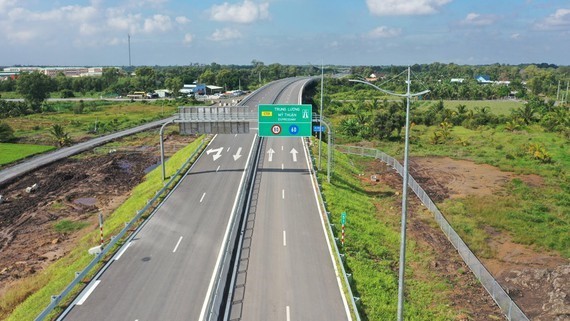 Trung Luong - My Thuan Expressway is still in the finishing stage. (Photo: SGGP)

The part of the highway crossing Hau Giang Province has a permitted speed of 60 kilometers per hour for 4-wheelers and 50 for motorbikes. Despite that, serious traffic accidents still plague the area, while truck drivers who respect the speed limit complain about constant traffic jams.

“This highway is seven-meter wide and it has been that way for 50 years now. We never dare to take over another vehicle due to risks of accidents,” said a cargo truck driver.

On another note, the economic potential of An Giang and Kien Giang provinces have also been hindered due to degrading infrastructures. The region is responsible for nearly 9 million tons of rice and over 1 million tons of aquatic product export each year.

Currently, transporting by road costs a lot for Kien Giang Province in terms of logistics since frozen seafood needs to be delivered fast, but the road system does not allow it, said Kien Giang’s local authorities. This area exports at least 5,000-6,000 tons of frozen shrimp and squid each year.

Local tourism also suffers, as the national routes available are either degrading or simply too narrow to allow a large volume of traffic to pass quickly.

Except for those under construction, most of the expressways in the Mekong Delta are waiting for funding, local authorities reported. Due to limited resources, the Government in the short term will focus on completing the North-South highway.

In terms of local ỉnfastructure, the Ha Tien - Rach Gia route is expected to get funding in the 2021-2030 period. Kien Giang Province in 2022 invested nearly VND2,000 billion to complete inter-district roads and some on Phu Quoc island, but needs to wait for the government to fund cross-province routes.

According to the Ministry of Transport, the ministry in the period from 2016 to 2021 implemented 31 projects, of which 14 have completed, and built 281km of national highways and a number of large bridges. The projects that have been put into operation have really brought into play their effectiveness, contributing to socio-economic development, ensuring national security and defense. The investment solutions have focused on climate change adaptation and sea level rise, ensuring stability and sustainability.

But the reality also shows that the transport infrastructure in the Mekong Delta has not really made a breakthrough.