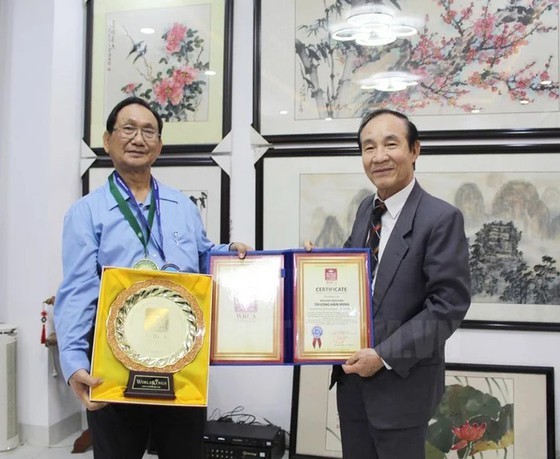 Painter, People's Artist Truong Han Minh (L)  receives record certificate from the Asia Record Organization .
Painter Truong Han Minh was recognized for having the most watercolor paintings which were auctioned for charity by the Asia Record Organization in 2013. He was granted the “People’s Artist” title and the Third-class Labor Medal of the President of Vietnam for his outstanding contribution to the ethnic minority communities, especially poor Chinese people in 2018.

The “Wealth and the Fountain of Youth” artwork measuring 4.1 meters long and 1.25 meters high was recognized as “Vietnam’s longest watercolor flower painting” in 2010.
The painter was the volunteer who painted images to illustrate President Ho Chi Minh's poem collection 'Nhat Ky Trong Tu' (Prison Diary) in response to the 'Studying and Following President Ho Chi Minh's Moral Example' campaign.
In addition, Vietnamese natural landscapes are major theme in his paintings, such as terraced rice fields in northern Vietnam, mangrove forest in southern region, Hoi An ancient town, Guom (Sworld) lake.
Truong Han Minh was born in 1951 in Cho Lon in Ho Chi Minh City. He originally came from Guang Dong in China. He had a passion for painting since early childhood and was introduced to watercolor painting at the age of 17.
Truong Han Minh was also Chairperson of the Chinese Fine Arts Association and a member of Vietnamese Fine Arts Association. He has taught at many Art schools in the City.
The painter is a master in traditional Chinese watercolor paintings in Vietnam with 60 years experience in watercolor painting.
His paintings have been displayed at the Vietnam Fine Arts Museum; Ho Chi Minh City Museum; Museum of the Nationalities in Vietnam; and in many other countries such as the U.S., France, Australia, Canada, Japan, China and Taiwan (China).
Chairwoman of the Vietnam Fatherland Front of HCMC, To Thi Bich Chau sent her words of condolences to his family, honoring the painter’s patriotism, outstanding contribution to the fine arts of the city and building national solidarity bloc.
His funeral is held at his private home in District 11.