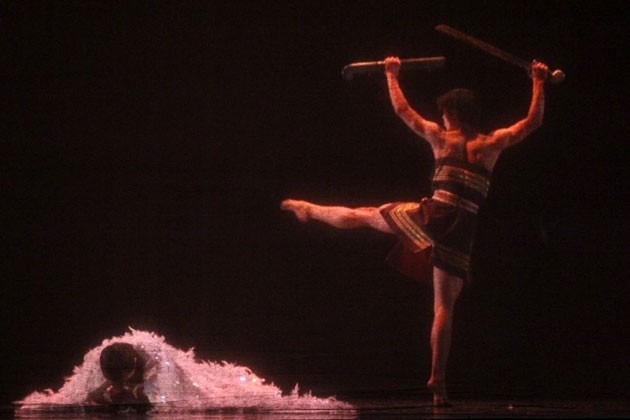 A scene in the play
The dance performance based on the epic Vietnamese love story between My Chau and Trong Thuy is mixed ballet, contemporary, and folklore dance styles by choreographers of Meritorious artists Nguyen Thi Thuy Hang and Phan Luong, and Nguyen Minh.

The play will be performed by Meritorious Artists of Phan Luong and Thu Hang, and artists namely Le Thanh, Duc Hieu, Vu Anh and more.
The play tells the love story between My Chau and Trong Thuy. According to the legend, An Duong Vuong, the King of Au Lac state received a magic crossbow from the Holy Turtle to build the Co Loa citadel and save the country from aggressive invaders from the North. His daughter, princess Mỵ Châu fell in love with Tromg Thuy, a son of Trieu Da, the lord of a rival state that bordered Au Lac in the north.
After the wedding, My Chau carelessly told her new husband about the crossbow, who stole it and replaced it with a fake one. The kingdom was promptly attacked. The king killed My Chau for her betrayal. Trong Thuy found My Chau, overwhelmed with grief, drowned himself in a well in Co Loa citadel.
The play is expected to be presented to audiences in provinces and cities nationwide, including HCMC.