The book titled "Truong Sa – Here We Come" showcases 150 photos of the Truong Sa shot by journalist My Tra of The Voice of Vietnam on her trip to Truong Sa (the Spratly) archipelago in 2016-2017.

The photography book honors martyrs who sacrificed their lives for national independence and outstanding contributions of people at home and abroad to the protection of Vietnam's sovereignty over its sea and islands, said Nguyen The Ky, member of the Party Central Committee and chairman of the Central Council for Theory and Criticism of Literature and Art.
The book has not only introduced nice pics of rich and diverse natural landscapes of the islands, but also depicted portraits of the daily lives of the soldiers and people who are working and living on the Spratly islands and the DK1 platform to protect the country's sovereignty, Rear Admiral Pham Van Vung, political commissar of the Vietnam People’s Navy emphasized.
The book helps raise awareness among all Vietnamese people, particularly the young generation, on patriotism, national unity and a sense of responsibility.
Before the launch of the photo book, the female photographer organized her first photo exhibition on Truong Sa Island in Hanoi from August 30 - September 6, 2017. 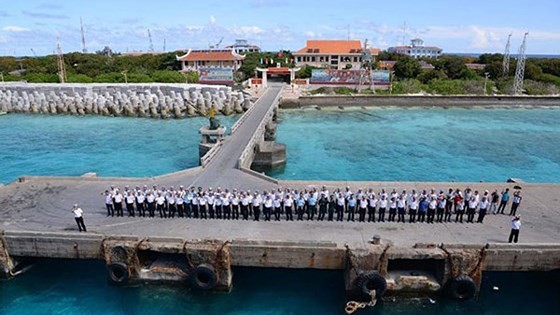