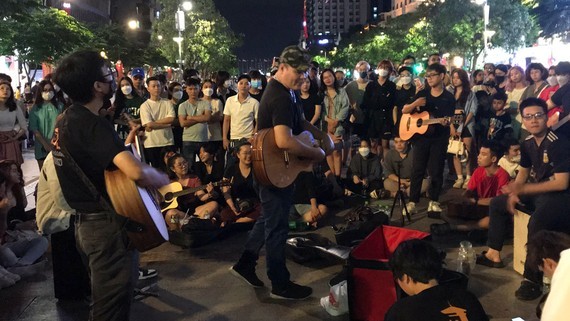 Currently, Saigon youth often perform types of street art in Nguyen Hue Walking Street in HCMC’s District 1 every evening, especially on weekends. Activities are regularly organized such as acoustic music (vocal music, not using electronic music), Flashmob dance, Kpop dance (Korean music groups and music), Dancesport (sports dance). Many people gathered to watch and even took part in performance.
In addition, even on the pedestrian street, several young people have been transforming into living statues, a performer who poses as a statue or mannequin, usually with realistic statue-like makeup, adorning this vibrant street. This is also a new space and a feature of Ho Chi Minh City in recent years, especially for young people and tourists.
21-year-old Nguyen Ha Minh Thu in Thu Duc City often goes to Nguyen Hue Walking Street to play and watch street art performances every Sunday. She said that she is a Kpop fan, so she spends time watching the cover dances on the walking street where she can learn and interact with older friends. 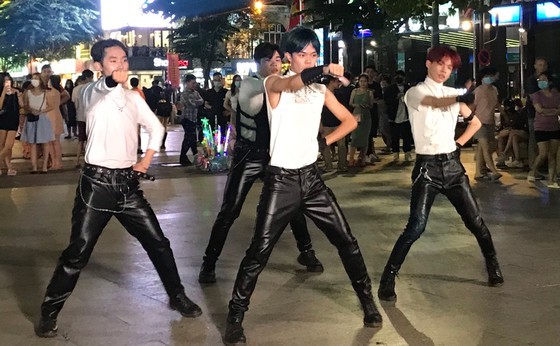 Street art performance is spontaneous in nature. Thereby, the artists performing here can create closeness and easily interact with their audience. Chu Quang Nhat in District 7 said that through the social network, he has known about street art performance activities revealing that he loves music much; so he has been sometimes spending time with his friends on weekends watching street musical performances.
Regularly participating in performances, a representative of the young group The Green said that every weekend the group members go to the walking street to play the piano and sing for everyone as well as satisfy our passion for music and everyone's entertainment needs.

By Do Quyen - Translated by Anh Quan