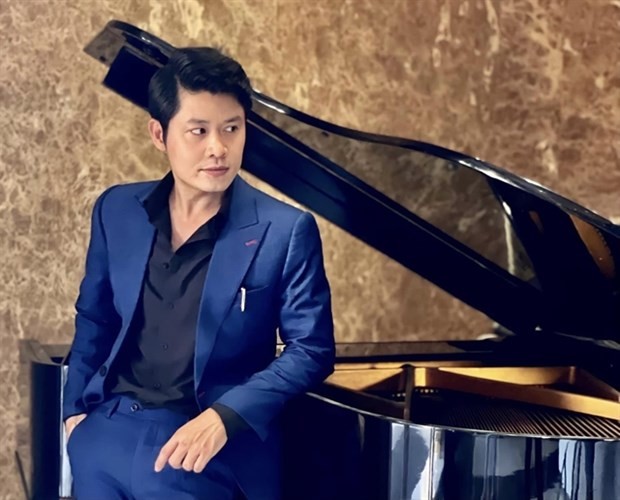 Composer Nguyen Van Chung is known to Vietnamese audiences for his songs about love and family. (Photo courtesy of the composer)
The four hits that Chung has the rights to have sold are: Vang Trang Khoc (The Crying Moon), Chiec Khan Gio Am (The Warm Handkerchief), Bay Giua Ngan Ha (Flying in the Galaxy) and Dem Trang Tinh Yuu (Moon Night of Love).
In an interview with Tien Phong newspaper, the 38-year-old musician said that some singers in China really liked his ballads and wanted to perform them in Chinese.
“My friend introduced me to some Chinese singers who wanted to buy the rights to my songs, so they could adapt them to Chinese, perform, and release them in the Chinese and global markets.
"They also told me I am the first Vietnamese musician whose songs are copyrighted in China,” Chung said.
According to Nguyen Van Chung, his songs are loved by many people, perhaps because of their gentle melody and ease of listening.
The HCM City-born composer added that Chinese music producers are also interested in some of his other works, including Mua Dong Khong Lanh (Winter is Not Cold), Ngoi Nha Hoa Hong (House of Roses) and Em Luon Trong Tam Tri Anh (You are Always on My Mind).
“I am very happy and proud that my songs are not only well received by the domestic audience, but also by foreigners. The Chinese music market is a big market. The fact that a Vietnamese song is loved there will be an opportunity for many hit songs by other Vietnamese musicians to be known by the global audience," Chung added.
In 2017 and 2018, the song Nhat Ky Cua Me (Mother’s Diary) by Nguyen Van Chung, was released in Germany and Japan, to international acclaim.