The painter received the World Records Union (Worldkings)’s recognition for completing abstract paintings by drawing with his own fingers on glass surfaces.

The performance was witnessed by the World Records Union (Worldkings), the Vietnam Record Association (VietKings) and more than 300 people; and shot by the HCMC Youth Film Studio, including Dr. Biswaroop Roy Chowdhury, chief editor of Asia Book of Records on June 30.
On this occasion, Tien also presented to viewers nearly other 50 oil paintings which were drawn on glass in the event.
Born in 1961 in the Mekong Delta province of Ben Tre, Doan Viet Tien has been well-known about his paintings in reserve on glass since 2005. So far, he has created more than 1,000 paintings. Tien has made Vietnamese records for three times in 2005, 2018 and 2019. 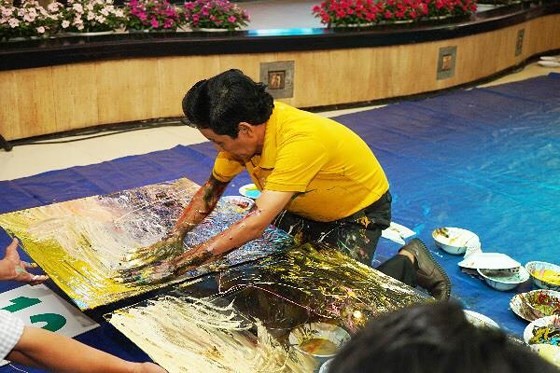