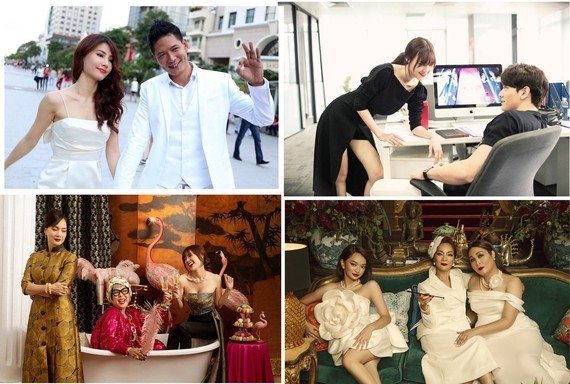 The chick-flick series called Gai Gia Lam Chieu (The Tricky Ladies) is regarded as the first pioneer in creating the idea of a cinematic universe.
Fictional shared Universe or shared universe is a fictional universe to which more than one writer contributes a work that can stand alone but fits into the joint development of the storyline, characters, or world of the overall project. Works set in a shared universe share characters and other elements with varying degrees of consistency. A fictional universe can be contained in a single work or in serialized fiction.

Beside long-standing cinematic universes, such as a series of American superhero films of the Marvel Cinematic Universe, the Star Wars Cinematic Universe, there is also the DC Cinematic Universe that is well-known for movies, including Batman v Superman, Justice League, Aquaman, Shazam, Joker, Wonder Woman 1984.
The list also includes the Conjuring film series, MonsterVerse - a series of monster films featuring Godzilla and King Kong of Warner Bros.
In Vietnam, the chick-flick series called Gai Gia Lam Chieu (The Tricky Ladies) by director Bao Nhan and Namcito is regarded as the first pioneer in creating the idea of a cinematic universe.
Gai Gia Lam Chieu (The Tricky Ladies) with the fifth edition titled Nhung Cuoc Doi Vuong Gia (Luxurious Lives) debut nationwide in the beginning of March focuses on the women's empowerment.
Director Namcito believed that many cinematic universes will be created in coming time if the strategy for the development and production of shared-world anthologies is built methodically. A film series that share the same fictional universe must present the joint development of the storyline and characters.
The local movie producers have ability to build a strong brand identity for their businesses, establish the position in the market and win the hearts of the audience, he said.
The Vietnamese movie industry has started to capture the term of Fictional shared universe. It means that production units and directors have set their own development paths. A fictional universe is a self-consistent fictional setting will help movie lovers understand the storyline, characters, and world of the overall project as well as make audience to await for the next editions, said director Tran Huu Tan who is nursing a shared horror movie universe.
Meanwhile producer and actress Ngo Thanh Van released her ambition to create the magical universe of Vietnamese traditional tales.
None movies that have extended editions are called cinematic universe. The remarkable consistency and creativity of the storyline and characters throughout the entire project are most important factors to attract filmgoers, said director Namcito.
Director Ly Hai also agreed with Namcito’s opinion. He said that his action comedy movie series, Lat Mat (Face off) is not a cinematic universe because the its sequels featuring new contents and characters are not the continuation of the previous parts.
The shared fictional universe centers on requiring an enormous investment of time and energy to write a script to expand the storyline and characters in the continuations. Therefore, the first edition of the series must have its own specific elements to attract audience and make fans eagerly awaited the sequel, added director Tran Huu Tan.