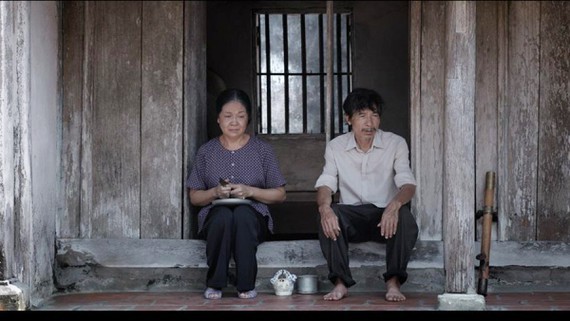 A still in the film "Memoryland"
The movie is the second cinemathetic works of director Bui Kim Quy, including Da Qua Giao Thua (New Year's Eve has gone past) in 2006. The film was supported by the ASEAN Cinema Fund Busan's Script Development Fund in 2016.

The Memoryland tells about three stories of Send-off, Nether-World, This-World take place in three different strips of time, space and locations, closely connected by death.
The 26th Busan International Film Festival has 11 selections for its New Currents main competition, including movies of Iran, Indian, South Korea, China, Japan, Kazakhstan and Indonesia. Films will be screened at the film fest from October 6-15. In which, the screenings of the Memoryland will take place on October 10-14.
Director Tran Thanh Huy won the “New Current” prize at the 2019 International Busan Film Festival for the movie “Rom”. The film had a box office record of VND55 billion (US$ 2.3 million) after its premiere in the country within 10 days since September 25, 2020.
The New Currents Award is given to the two best feature films selected from the first or second works of new Asian directors introduced in the New Currents section (a competitive section of BIFF for Asian films).
Busan International Film Festival 2021 attracted 223 movies from 70 countries will compete in the various awards, such as New Currents Award, Sonje Award, BIFF Mecenat Award, Actor & Actress of the Year, NETPAC Award, FIPRESCI Award, The Asian Filmmaker of the Year and more.
Started in 1996, the annual Busan International Film Festival is one of the most significant film festivals in Asia. The event aims to introduce new films and first-time directors, develop and promote young talent, especially those from Asian countries.