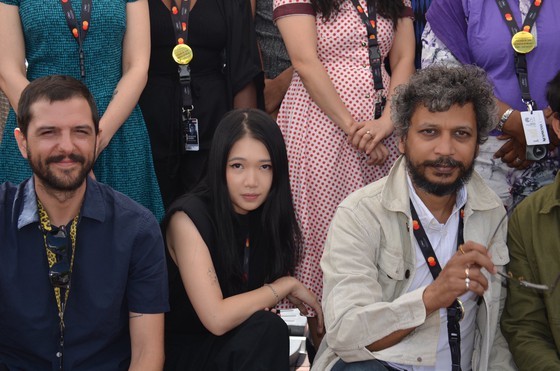 Linh Dan (black, center) with selected filmmakers in the program La Fabrique
Within the framework of the program's activities, Linh Dan and directors from countries including Mexico, Nepal, Ukraine, India, Egypt and some African countries have the opportunity to meet and work directly with the curator of leading film festivals in the world such as Christian Jeune - Artistic Director of the Cannes Film Festival, Eva Cahen - Head of the Curatorial Board of Semaine de la Critic, representatives of the Venice, Rotterdam film festivals.
In addition, the projects featured in La Fabrique are also introduced to famous specialized film magazines and officially appear on the red carpet where the name of directors and their countries were spoken loudly. In particular, they also have the opportunity to meet many potential co-producers from many countries around the world, especially France and Europe. 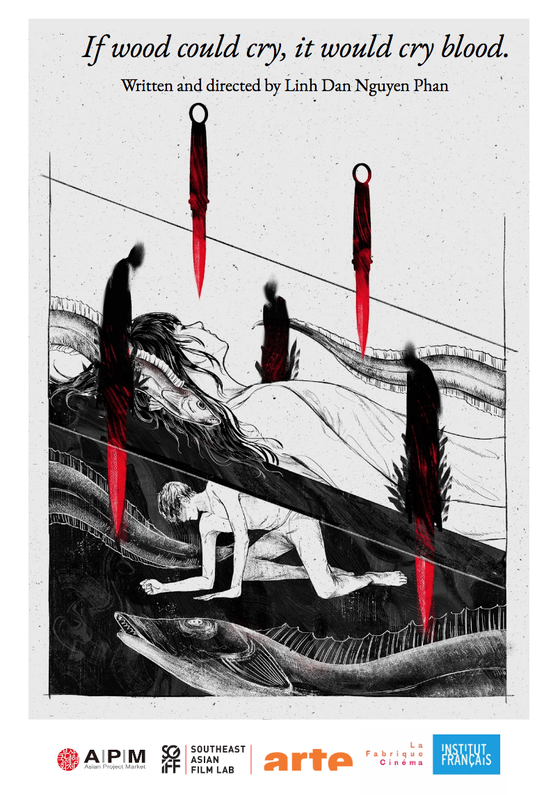 Poster for the English version of the Knife Launching Plank project
From Cannes, female director Linh Dan said that after more than two years of hiatus due to the epidemic, her attendance at Cannes Film Festival activities with filmmakers from many countries around the world is a valuable opportunity to learn and accumulate experience.

She revealed that the process of making independent films and going to film festivals to raise capital and find partners for the project is long and arduous, but she found it fascinating because she can do what she loves and especially get to know many peers in the profession who can share the same passion; therefore she is more determined on her career.
She also said that she still regularly contacts writer Mac Can and hopes the project will be implemented soon.
The movie with the English name If Wood Could Cry, It Would Cry Blood, is Linh Dan's first independent film project adapted from the novel Knife throwing board by writer and comedian Mac Can. The book tells about Mac Can’s childhood experience when he was the second child in a family that made a living as a traveling circus performer. The film adaptation focuses on three children who have to perform a dangerous knife throw – the most successful performance of the circus.
Before attending La Fabrique at the Cannes Film Festival, the film attended the Asian Project Market at the Busan Film Festival 2021 and received the ArteKino Award as well as being invited to attend the South East Asian Film Lab of the Singapore International Film Festival. 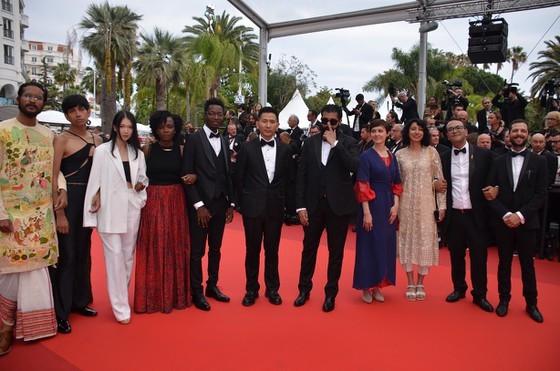 Linh Dan (white shirt) appeares on the official red carpet of the Cannes Film Festival 2022
Currently, Linh Dan is the director of photography for movies and is a rare female filmmaker to take on this role in Vietnam. Before that, she was a director of photography for the feature film Bi Mat Cua Gio (Secret of the Wind) by director Nguyen Phan Quang Binh which was presented in the category “A Window on Asian Cinema” at the Busan International Film Festival in the Republic of Korea in 2019. She has just finished filming for Co gai tu qua khu (Girl from the Past) project with directing duo Bao Nhan - Namcito.
Founded in 2009, La Fabrique's selection committee made up of scriptwriters, directors, editors, consultants, festival programmers, and members of national and international cultural or cinematographic organizations in France each year selected ten potential film projects that are in the script development stage of directors making first or second films. They were invited to the Cannes Film Festival to have the opportunity to meet filmmakers, representatives representing major film festivals, consultants, and especially potential investors for the project.
La Fabrique is an activity regularly organized by the French Institute and Cinema Du Monde every two weeks of the Cannes Film Festival with selected and potential projects from Africa, Latin America, Asia and the East, Europe and the Middle East.