Under the motto of “Building a Vietnamese Film Industry Rich in National Identity, Modernity and Humanity”, the festival will run until November 20 featuring 128 films from 42 units, including 26 motion pictures, 56 documentaries, 15 scientific films, and 31 animated films.
The 22nd festival will present two new awards, one for a feature film with the best cinematography and the other for outstanding debut by a director.
"The new awards honour the development of cinematic effects in the cinema industry and new directing talents," said Vi Kien Thanh, Director of the Ministry of Culture, Sports and Tourism's Department of Cinematography and head of the festival's organisation board.
The new award for outstanding debut by a director will see competition among three directors including Mai Thu Huyen with “Kieu”, Nguyen Manh Ha with “Linh Chien” (War Soldiers) and Tran Thanh Huy with “Rom”.
Director Huy is a strong contender after winning a top award in the New Currents section in Busan. It was also the first time a Vietnamese film has won a top award at the most prestigious Asian film festival. 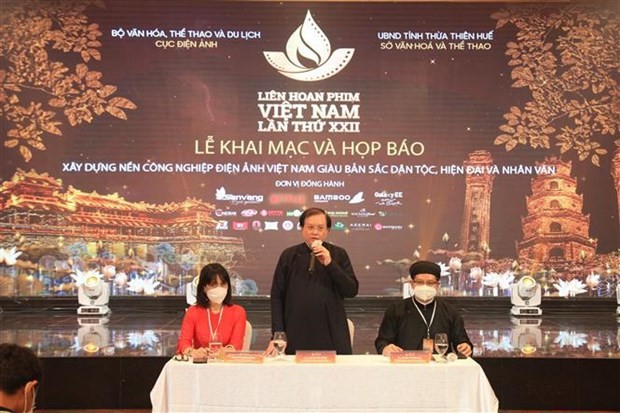 At the event (Photo: VNA)
Compared to the previous edition of the festival, the number of motion pictures has increased to 26 films. Seventeen films are selected to compete in different categories and the last will be shown in the Panorama Programme.
Besides the five films ordered by the State-owned studios, the others were produced by private studios, mainly in categories such as horror and action.
Some movies screened at cinemas achieved high box office revenue, such as “Bo Gia” (Dad, I'm Sorry), “Gai Gia Lam Chieu V” (Camellia Sisters), “Mat Biec” (Dreamy Eyes) and “Tiec Trang Mau” (Blood Moon Party).
Films on war and the post-war period, which have not been seen in cinemas, will also feature at the festival. The films include “Con Giong” (A Thunderstorm) by Tran Ngoc Phong, “Binh Minh Do” (Red Dawn) by Nguyen Thanh Van, “Khuc Mua” (The Rain) by Bui Tuan Dung, and “Linh Chien” (War Soldiers) by Nguyen Manh Ha.
Documentaries account for a large number of the total works. The Central Science and Documentary Studio sent the most documentaries to the festival, with 24 films.
In addition to the themes of resistance wars and historical figures, many documentaries highlight the fight against the Covid-19 pandemic in Vietnam, making a very strong impression on audiences such as the film “Ranh Gioi” (The Boundary) by Ta Quynh Tu from Vietnam National Television.
The festival will give individual awards honouring the best director, best scriptwriter, best cameraman, best actor and actress, best musician and best director of photography.
Despite the many impacts caused by the Covid-19 pandemic, the film industry has made great efforts to maintain production activities and complete many cinematic works, said Deputy Minister of Culture, Sports and Tourism Ta Quang Dong at a recent press conference held in Hanoi.
In addition to honouring the country's film industry, the festival will be a bridge for new films to reach the public via digital platforms, he said.
A number of side line events will be organised both in virtual and in-person forms.
An exhibition themed “Thua Thien-Hue - Destination of Film Makers”, and an online exchange programme with artists will be held. A film week was held both in the capital city of Hanoi and the central city of Da Nang between November 10-16.
The award ceremony will be held at 8pm on November 20 at Song Huong Theatre and broadcast live on Vietnam National Television.