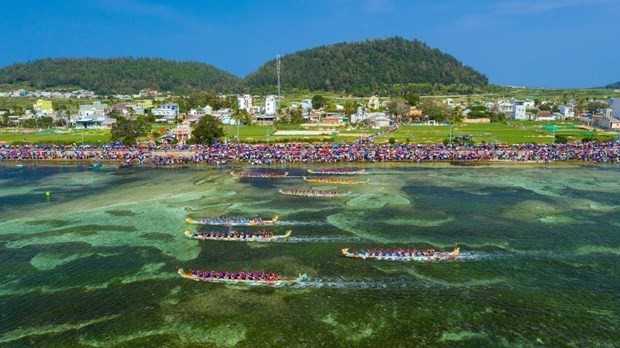 The Tu Linh boat racing festival in Ly Son island district (Photo: daolyson.info)
The tribute is also paid to soldiers who fought for the country’s sovereignty over the Hoang Sa (Paracel) and Truong Sa (Spratly) archipelagos.

The Tu Linh boat racing festival is associated with a long history of the country when Vietnamese residents from the mainland settled in Ly Son island between the late 16th century and the early 17th century, under the Le Trung Hung Dynasty and Nguyen Lords.
According to old documents, the Tu Linh boat racing festival on Ly Son Island was first held in 1826. It takes place around the Lunar New Year festival to pray for good weather, bumper crops, and peace. It is also meant to pay tribute to ancestors who explored this land, as well as the then Hoang Sa flotilla that planted sovereignty markers on the Hoang Sa (Paracel) and Truong Sa (Spratly) archipelagos.
The festival is called Tu Linh because the racing boats are decorated with symbolic shapes of the quartet of mythological creatures in Vietnam’s traditions and beliefs, which are dragon, qilin, tortoise, and phoenix.
Long (Dragon) symbolising robust crop, fertility and royal power, Lan (Quilin) and Phuong (Phoenix) embodying talented people and Quy (Tortoise) - the emblem of strength and longevity must be the most outstanding sacred animals in Vietnam.
This is the largest-scale cultural and ritual activity on the island, attracting the participation of a huge number of local people.
Visiting Ly Son in the days ahead of the festival, every corner of the island district is teeming with excitement. 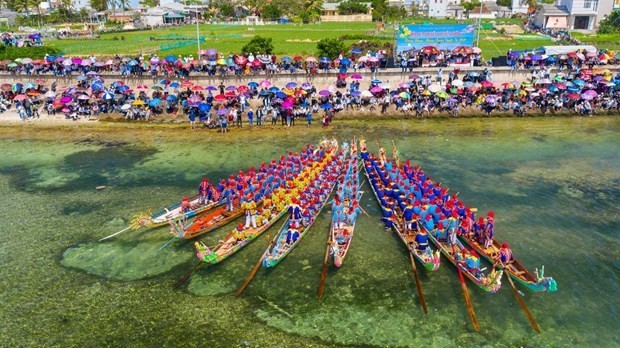 Racing teams in the festival (Photo: daolyson.info)
In the yards of the temples in An Vinh and An Hai communes, islanders gather to finalize the preparations for the beginning of the boat race.
Traditionally, there are eight boats participating in the event.
The participants should be healthy and skillful men. Boats must be firm and slim so that they can move very fast through the water.
In the past, the boats were designed for only 14 people; however, in recent years, the boats have been built for 24 people. Each team has its own uniform with red scarves on the participants’ heads. The shouts of encouragement, along with the determination of racers, always makes the festival very exciting.
To preserve and bring into play this festival, the Ly Son district People’s Committee conducted surveys and studies over the past years to compile a dossier seeking the inclusion of this activity on the list of national intangible cultural heritage.
The Ministry of Culture, Sports and Tourism made the recognition in September 2020.
Thanks to this move, Ly Son district is currently home to two festivals named national intangible cultural heritages, with the other being “Le khao le the linh Hoang Sa” (Feast and Commemoration Festival for Hoang Sa Soldiers).
The Feast and Commemoration Festival for Hoang Sa Soldiers this year was held on April 19.
According to Vietnam’s feudal state history, the Hoang Sa Flotilla was set up when the Nguyen Lords began their reign in the south of the country. Thousands of sailors overcame roaring waves and storms to survey sea routes, plant milestones and erect steles affirming national territory in the Hoang Sa and Truong Sa archipelagos, and exploit marine resources ordered by Nguyen Lords. Their missions were full of dangers, and many of them never returned to land. 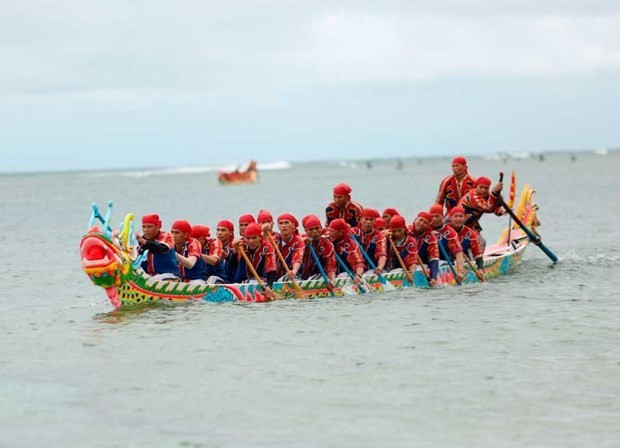 (Photo: daolyson.info)
To pay tribute to the men enlisted in the flotilla, “Le khao le the linh Hoang Sa” has been observed through hundreds of years by families in Ly Son island and many coastal areas in Quang Ngai.
The festival, which is held every April on the island, was recognised as part of the national intangible cultural heritage by the State in 2016. It reflects Vietnam’s history of protecting the national sovereignty in the East Sea, especially over the Hoang Sa and Truong Sa archipelagos.
Ly Son island covers an area of less than 10 sq.km but it has nearly 100 relics, most of which are related to the Hoang Sa Flotilla, such as the empty graves built for Hoang Sa soldiers who never returned to land, the temples dedicated to Pham Quang Anh and Vo Van Khiet who were captains of the Hoang Sa Flotilla, and a showroom displaying the items of the Hoang Sa Flotilla sailors who also controlled Bac Hai and Ba Ri Lagoon.

A monument and memorial house dedicated to the Hoang Sa Flotilla stand near the main road of the island.