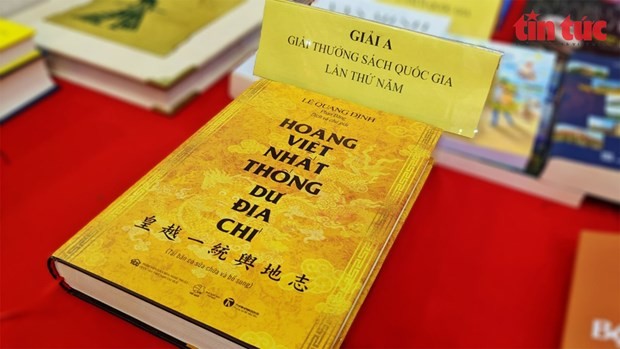 The revised translation of "Hoang Viet nhat thong du dia chi", which wins the A prize. (Photo: VNA)
The book was written by the then defence chief Le Quang Dinh when King Gia Long was just crowned and was in the process of organising and stabilising the imperial court after several centuries of conflicts.
The winning edition was translated and annotated by Phan Dang and published by the The Gioi Publishers and Thaihabooks.
The A prize, also the highest one worth VND100 million (US$4,186), was announced at the award ceremony held in Hanoi on October 3 evening.
Addressing the event, Deputy Prime Minister Vu Duc Dam lauded the role of book authors, translators, and publishers, and hoped the national award will also become a destination for books written and published overseas in the long run.
This year’s awards saw the participation of 298 books and book collections from 48 out of 57 Vietnamese publishers. 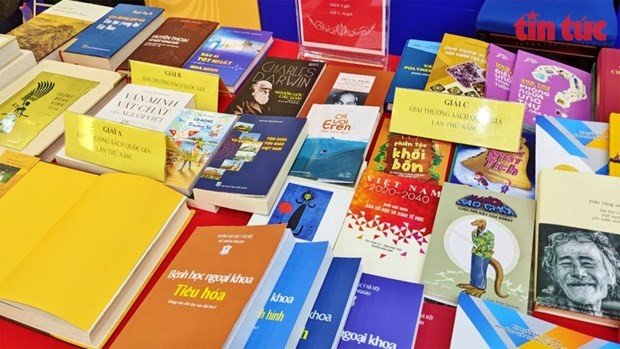 Winning books and book collections this year. (Photo: VNA)
In addition to the top prize, there were nine B prizes worth VND50 million each and 16 C prizes worth VND30 million each.
Held annually since 2004, the National Book Awards has become a prestigious event of the publishing industry, honouring the value of books, authors and publishers throughout the country. It is an opportunity for publishers to look back on their achievements over a year and for readers across the country to gain more knowledge about books and the publishing industry.