Thong Dai (40cm h., 52cm diam.) This work signifies Unification of the country (Nhat Thong Son Ha).
During the 300 years of its development phase, Satsuma pottery grew into the most cherished export product from Japan. During the Meiji era (明治, 1868-1912), Satsuma was identified as earthenware, and not as porcelain. The Satsuma antiques which collectors now crave for, exude a soft, warm grace of terracotta, ivory-white frayed enamel with spectacular artwork painted in brush ink and covered with real gold.

Nowadays, the product we call Satsuma pottery does not actually come from the Satsuma province, but may have well be made and decorated in Kyoto, Yokohama, Tokyo, or any other region in Japan, although the essence of the Kyo-Satsuma school is typical, a style that conquered Western tastes. The most beautiful antique and modern Satsuma art products were from the period between 1830 until 1930, some of which are now rare masterpieces.

Today, Satsuma antiques are popular with collectors mostly made during the period 1897 to 1917, or late Meiji period or early Taisho period, when Satsuma pottery was showing signs of decline due to the impact of the world war in the west, and Japan's transition to militarism.

Satsuma antiques do not include products that are all made in the Satsuma province, but usually there is a seal engraved with a cross in gold or blue circle of the Shimazu clan (島津) at the bottom. When another family wants to offer a diplomatic gift or make a worthy heirloom, the treasure is identified with the family crest on the neck of the jar or the lid. These products are usually made by master artisans and are often kept in a private museum or in a quiet home of a former Western aristocrat or official.

The history and quality of Satsuma antiques appeals to wealthy collectors not only because of their rarity but also because they are reminiscent of a regal golden post-modern period before the Industrial Revolution.

Today, most of the collected Satsuma ceramics are the versions exported to the world since 1862, and are especially associated with the Meiji period, representing the integration of the Far East into the Western world. The resounding success at the Vienna fair in Austria in 1873 created a frenzy among collectors for gold-plated ceramic painted objects in the rich West, created by Japanese artisans during the period of Japan’s transformation. Arts and crafts ceased to be patronised by the nobility after the transition of military power and unification from 1867 to 1868, especially after the Satsuma Incident in 1877.

With the patronage of artisans and painters, Meiji was allowed to engrave and print titles into Satsuma terracotta paintings. A collector's passion is to look for evidence of provenance and chronology in the first masterpiece, before appraising the paintwork, inscription, and the ability to harmonize gold coating on the entire work.

Decorative jar of worship (172 cm h., 72 cm diam.) Describes scene where Emperor visits royal family living on island. The product was a diplomatic gift to the West by Prince of Gotō in mid-19th century.

For example, if one encounters the Taizan-zo seal (帯山造) next to Dai Nippon (大日本) and Satsuma (薩摩), a collector will know that Taizan artist Yohei IX (帯山 陽平,1856-1922) made (zo) this Satsuma ceramic before 1922. If we know that Taizan closed the kiln in 1894, his impressive masterpieces were created no later than 1894, about the middle of the 100 years of Japanese Satsuma porcelain (1830-1930). It also means that items with only a painted signature without a watermark on ceramic, or marked with another stamp symbol may be dated 1894-1922.

If one comes across a delicate work with the Keida-Kinsei (慶田 謹製) seal, carefully crafted next to a Kaki-han at the bottom, the unreadable red mark will help us to date it before 1920. Since the artist Keida Masataro (慶田政太郎, 1852-1924) is renowned as the best Satsuma potter in Kagoshima Prefecture, his exquisite work was exhibited at the 1904 Saint Louis Exhibition, 1910 Japanese and British Exhibition, along with works by famous artists such as Kinkozan Sobei VII (錦光山 宗兵卫, 1867–1927), Ito Tozan I (伊東 陶山, 1846-1920) and Suwa Sozan I (諏訪 蘇山, 1852- 1922), and later introduced at the Panama Pacific International Exposition in 1915. 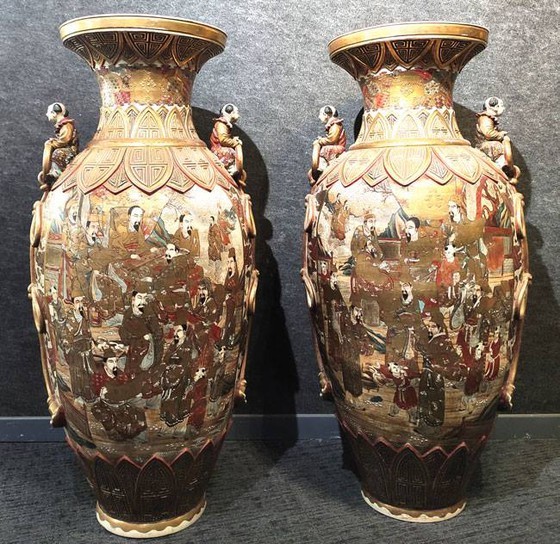