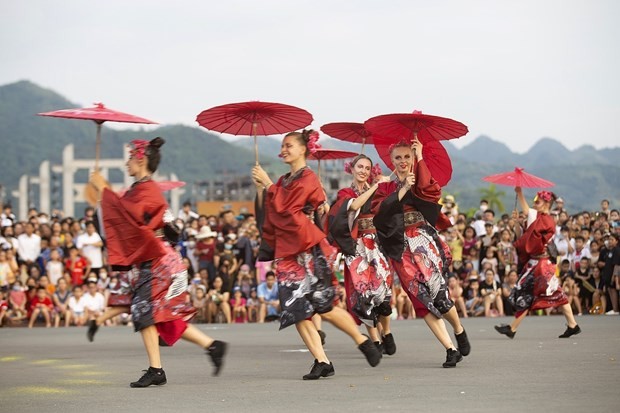 A performance at the event. (Photo: VNA)
The carnival with six parade cars and about 70 domestic and international dancers in colourful costumes moving along the streets of the city, departing from Cu Chinh Lan Intersection to Chi Lang road and ending at Hoa Binh Square. The event reenacted some festival rituals and folk games of six main ethnic groups living in the province, along with the performance of artists from Vietnam as well as those from Ukraine, Cuba, Belarus, Uzbekistan, Colombia and Argentina.
An art programme and ceremony to mark the recognition of the traditional ‘Khai ha’ festival and ‘Doi’ calendar of the Muong ethnic people in Hoa Binh province as national intangible cultural heritages were also held in the locality on the same day.
The art programme, which comprised three chapters, brought to the audience the images of beautiful nature, friendly people and cultural identity of Hoa Binh province that were staged through music and dance of local artists.
Vice President Vo Thi Anh Xuan said with its tradition, the Muong people have created many unique tangible and intangible cultural heritages, contributing to enriching the cultural treasures of 54 ethnic groups. The fact that “Khai ha” and “Doi” calendar were honoured as the national intangible cultural heritages associated with wet-rice agriculture, reflects a high level of development, she said.
The Vice President affirmed that these unique cultural values are the factors that unite the community, the source of strength that has been preserved, nurtured and passed on from a generation to another generation, helping local residents overcomes difficulties to develop the homeland into a more prosperous and more beautiful region.
Nguyen Phi Long, Secretary of the provincial Party Committee, said the recognition of the two national intangible heritages was the pride of the administration and people of Hoa Binh province, affirming that the province will be determined to preserve and promote the good traditional cultural values of the ethnic groups, striving to turn Hoa Binh into a well-developed province and ensure locals enjoy a prosperous and happy life.
Khai ha (going down the field) is a big festival of the Muong people in Hoa Binh province. Held annually right after Tet (Lunar New Year) to review the old year and mark a new year, the festivity aims to show their respect for gods and pray for a year of peace and prosperity.
Meanwhile, the Doi calendar, locally known as the bamboo calendar, was developed following the movement of the Pleiades stars and the moon. The calendar is translated through a set of 12 bamboo strips representing the year's 12 months. It was once used by locals to select good days to organise important events such as weddings and funerals. However, it has become less popular and is now interpreted by only local shamans and elders.