The “Doan Ngo Festival: Past and Present” is an example. The festival was held recently at the Thang Long Imperial Citadel, offering visitors an array of experiences in royal culture as well as traditional rituals.

According to the Thang Long-Hanoi Heritage Conservation Centre, the event’s organiser, during the late Le Dynasty (1533 - 1789), emperors would host a ritual during the Doan Ngo Festival, which falls on the fifth day of the fifth lunar month, to present fans to all mandarins. The presentation offered good blessings, health and luck to the recipients’ families

Reenactments of old festivals have also been held in Hue, including Te Xa Tac (Worshiping the Genies of Rice and Soil). It was one of the most important rituals performed by kings of successive feudal dynasties every spring to pray for abundant crops and peace.

Recently, within the framework of the Hue Festival, phoenix spring rolls were on offer as part of the tourism products implemented by the Department of Tourism of Thua Thien-Hue. According to Nguyen Van Phuc, the department’s director, these activities are expected to help Hue tourism develop sustainably.

A kite festival is also another event worth experiencing in Hue. Under Bao Dai King, kite competitions were usually held during holidays. The artisans of that time were always looking for new materials to improve their kites and improve the art of kite flying. More than 80 traditional kites made by artisans that are shaped like dragons, phoenixes, peacocks, butterflies, swallows, and goldfish took part in the kite festival which is held in April. These kites have a wingspan of 1.5 - 3m. 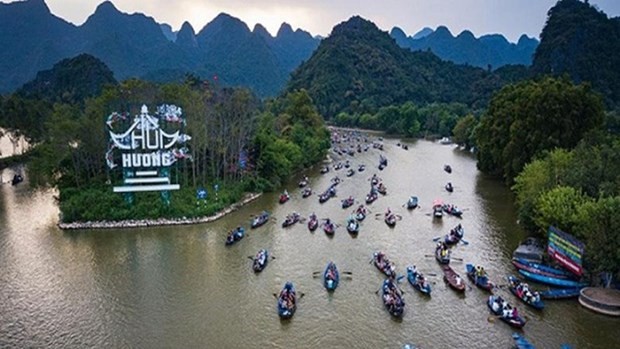 Huong Pagoda Festival is considered the biggest and longest festival of the year. (Photo: VNA)

Assoc Prof. Dr Bui Hoai Son, a permanent member of the Committee for Culture and Education of the National Assembly, agreed, saying that it is necessary to treat cultural tradition as part of tourism events.

"Creating events with cultural tradition does not only help the locality have more cultural events, thereby developing tourism, but also contributes to reviving it," he said.

However, it should be carried out prudently to avoid misleading or overusing, Son added.