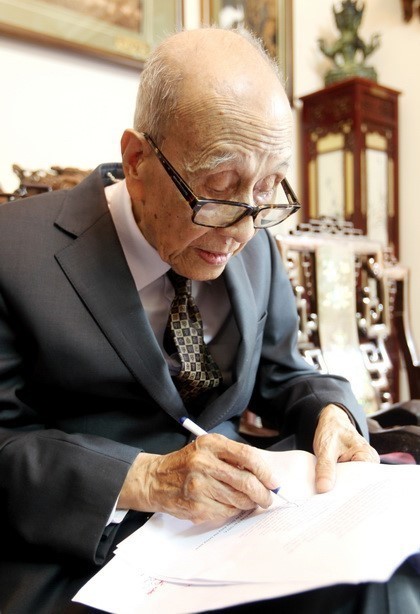 Professor Dang Vu Khieu
He died of old age, despite the best and most attentive care from doctors and the family, according to his son Professor Dang Canh Khanh.

He was born on September 16, 1916, in Hanh Thien village, Xuan Hong District, the northern province of Nam Dinh.
He graduated baccalauréat (tu tai) in Hai Phong moved to Hanoi to teach and first got engaged in Communist revolution efforts during the French colonial time before 1945.
He has managed through many culture-related positions at Party and State bodies, including director of culture department of Zone 10 in Viet Minh’s base Viet Bac during the first Indo-China war, deputy director of Vietnam News Agency, and the first director of the Vietnam Academy of Social Sciences.
He is a respectable scholar of Vietnam, who has received the Government’s Ho Chi Minh Prize in the first award round ever in 1996 for the series ‘Ban ve van hien Vietnam’ (Discussions on Vietnamese culture and civilization), conferred the title of ‘Hero of Labour in Doi moi (Renewal) period’ in 2000 and First-class Independence Medal in 2006.
He was honoured as one of the 11 outstanding citizens of capital city Hanoi in 2010, when the city celebrated its millennial anniversary.
He was the author of many epitaphs for fallen heroes and martyrs at the monuments and temples dedicated to them throughout the country, as well as various books on aesthetics, Marxist morality, the Communist Party of Vietnam's stances on morality, and the 'glorious' role of arts in Vietnam.