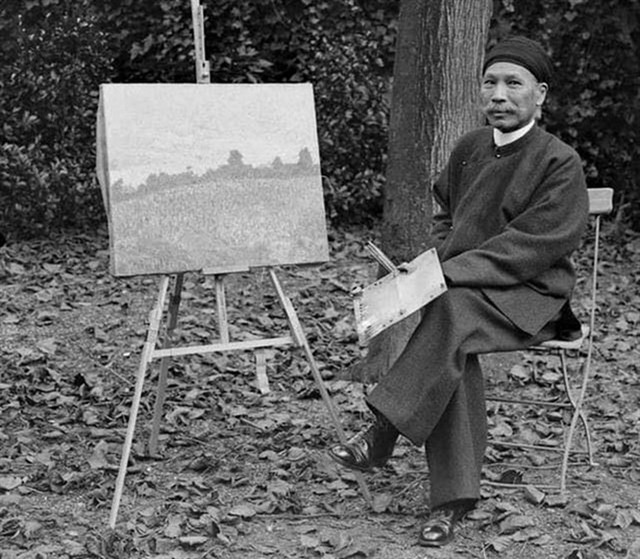 Emperor Ham Nghi pictured with a painting in Algeria. (Photos courtesy of the Hue Cultural Heritage Research and Development Association)
According to painter Dang Mau Tuu, Vice Chairman of Hue Cultural Heritage Research and Development Association, Emperor Ham Nghi was not so much seen as a painter but an exiled patriotic king, but with an impressive body of work he deserved to be honored as a painter.

Ham Nghi was the eighth emperor of the Vietnamese Nguyen Dynasty, but reigned for only one year (1884-85).

After the failure of the Can Vuong (Save the King) movement against French colonial rule, Emperor Ham Nghi was captured and exiled to Algeria, then a colony of France, on December 12, 1888.

According to historical documents, to get over his boredom in exile, he studied French and was able to communicate with French intellectuals and learned how to ride a bicycle, rare among Vietnamese at the time.

He also studied photography, literature and especially painting. His first paintings were self-portraits in exile, of him wearing traditional royal attire and a headscarf.

His self-portraits were implied: “I am still an Annamite (a reference to Vietnamese people during the French protectorate in Vietnam) and the French colonists cannot subdue me.”

In addition to his self-portraits, the Emperor also painted portraits of relatives and friends. His artworks were often signed Tu Xuan, a pseudonym meaning “the Son of Spring”.

His first canvas depicting the rural landscape of Algeria was signed on May 19, 1899. 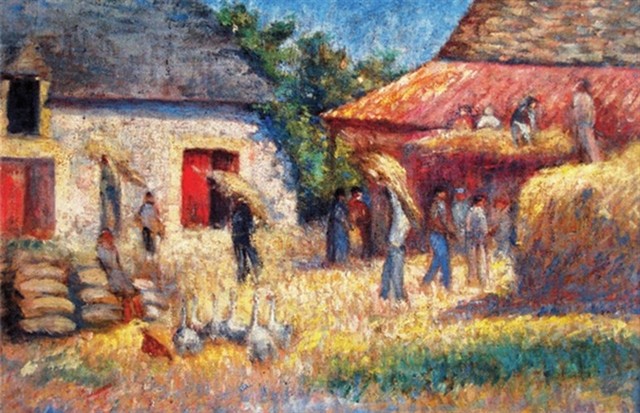 Untitled, an oil on canvas by painter Tu Xuan (an artistic name of Emperor Ham Nghi), dated 1900
“From 1899 to 1903, he applied impressionist techniques, using light and brighter colors while reducing black fringing, and focused on portraying landscapes,” said Tuu.

“He immersed himself in nature, praising it and forgetting his sorrows. In a letter to a friend, Charles Gosselin, he wrote: ‘This is what I want to say – I just enjoy the moment in African rural clothes’.

“His artworks are diverse, from oil paintings and pastels to bronze, plaster and wood sculptures. Using his innate ability, he quickly learned and absorbed the skills that were taught by famous sculptor Auguste Rodin (1840-1917). He created a number of bronze statues, some of which perhaps represent Eve.” 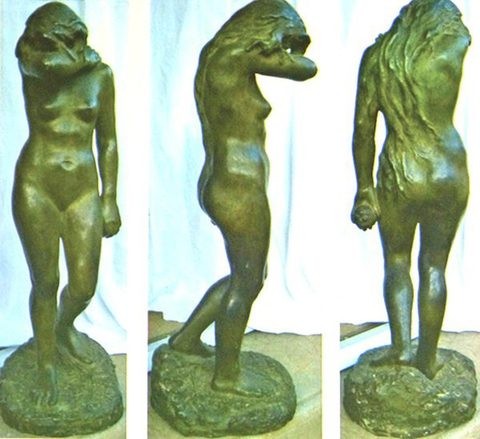 Besides painting, Emperor Ham Nghi was also a visual artist. He created a number of bronze statues, some of which represent Eve.
According to Tuu, Emperor Ham Nghi painted at least 25 oil paintings on canvas from 1895 to 1902, nine of which were signed Xuan Tu, two Tu Xuan and 14 left unsigned. Among them are 17 landscape paintings, the largest of which is 49 by 64.5cm, while the smallest is 24 by 25cm.

However, some researchers believe that Tu Xuan created up to 45 oils on canvas during this period as some of his works were not dated.

One of his best works in this period is a painting that depicts the Algerian landscape.

Amandine Dabat, a French postgraduate student of Vietnamese art history and Emperor Ham Nghi's fifth-generation descendant, commented that art offered an opportunity for the Emperor to preserve a bond with Indochina while in exile, and freely demonstrate his attachment to his homeland.

In his artistic life, Tu Xuan had three exhibitions in Paris, one at the Guimet Museum (1904), one at the December gallery (1909), and the Mantelet-Colette exhibition (1926).

The Mantelet-Colette exhibition featured 38 works in oils, 12 in pastels and eight bronze statues, including the famous painting Déclin du Jour (Decline of the Day). A number of his artworks were donated to the French.

Painting Déclin du Jour (Decline of the Day) by Tu Xuan.
During a talk in HCMC in 2015, Dabat revealed that there were fewer than 100 works by the Emperor left, which he had gifted friends and family members. Many of his paintings were destroyed when his house was burned during a battle in Algeria in 1962.

Dabat organized an exhibition featuring paintings and statues by painter Tu Xuan in Paris in 2016, which left a great impression on art communities. One of his oil paintings, created in 1915, Déclin du Jour, was sold at an auction in Paris in November 2010 to a French collector for 8,800 euros (US$9,240).

This painting was originally named La route De El Biar. The title Déclin Du Jour was found on a small paper note clipped to the wooden frame behind the painting, which said: “Decline of the day behind Annam Castle, painted by Emperor Ham Nghi in 1915”. The paper also said “Gift from Prince Annam” and was signed Tu Xuan. 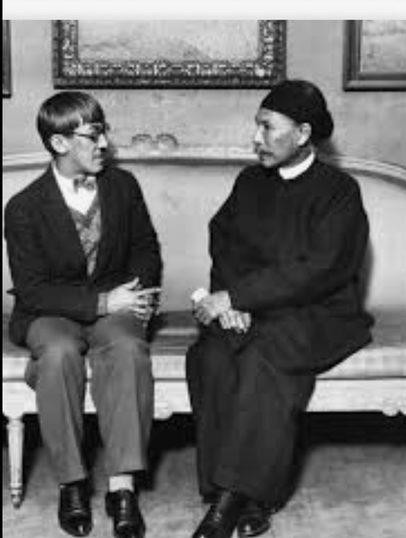 Emperor Ham Nghi (right) in Vietnamese traditional attire is seen talking with Japanese painter Léonard Tsuguharu Foujita.
The Thua Thien - Hue Provincial authorities at that time entrusted the Vietnamese Embassy in France to join the auction to purchase the painting, which was expected to supplement the collection of artefacts in the Hue Royal Antiquities Museum. However, an anonymous French collector paid a ten-times higher price.

"With the legacy of artworks by Emperor Ham Nghi, I think that the history of Vietnamese fine arts should credit his contribution into its flow,” painter Tuu said.

“The Hue Museum of Fine Arts should also study how to approach and purchase the works of Tu Xuan so that Thua Thien - Hue Province can enrich its collection with works by an artist who was once an emperor and also the first Vietnamese oil painter.”