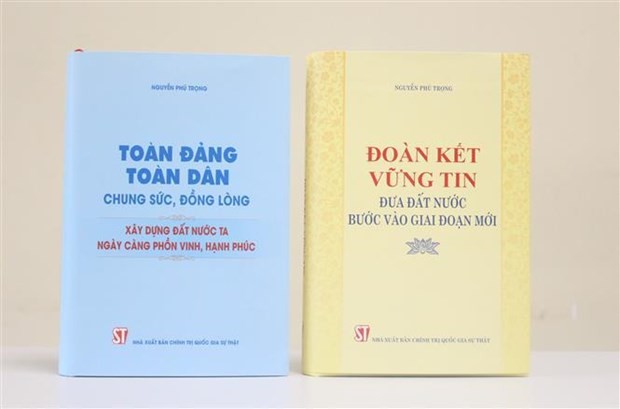 Two books by Party General Secretary Nguyen Phu Trong (Photo: VNA)
The books comprise of 180 important speeches, articles, interviews and congratulatory letters and messages by the Party leader from January 2018 to April 2021.
The contents are arranged under four themes of comprehensively promoting the Doi Moi (Renewal) along the socialist orientation; considering Party building and rectification a key task; improving the effectiveness and operational efficiency of the political system and bringing into play the strength of the great national unity; and taking the initiative in international integration and cooperation.
Regarding the comprehensive promotion of the Doi Moi along the socialist orientation, Trong emphasized the need to study, supplement and perfect mechanisms and policies in accordance with the actual situation of the country, each locality, ministry, sector and field on the basis of the Party’s stances, guidelines and policies on socio-economic development.
As for Party building and rectification, the Party chief pointed out in many speeches and articles that the work has always received special attention. He noted that Party building aims to make the Party always transparent and strong, while Party rectification is to overcome shortcomings and weaknesses to make the Party worthy of being the sole force leading the country.
Regarding the improvement of the effectiveness and operational efficiency of the political system and the promotion of the strength of the great national unity, Trong’s articles, speeches and congratulatory letters have reflected his deep, regular and continuous care about all sectors, agencies, and organisations in the political and social systems from the central to local and grassroots levels.
On the active international integration and cooperation, his messages and speeches at regional and international meetings, along with congratulatory letters and messages sent to Party and State leaders of countries which Vietnam has diplomatic relations with, have demonstrated the Party and State's policy on proactive and active integration and extensive international cooperation.