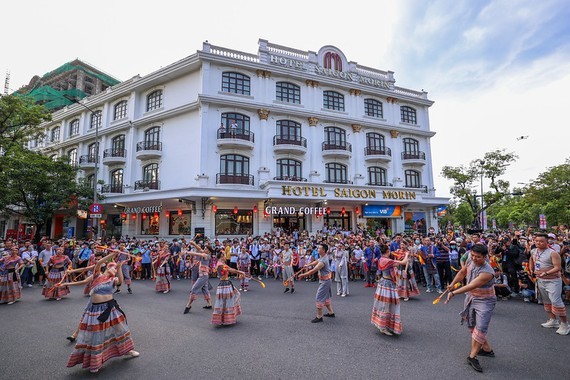 Tourists are excited with a dance of international art troupe.
Throughout last week, domestic and foreign visitors and residents enjoyed a fun and colorful festival atmosphere with unique art performances and exhibitions featuring cultural, art and traditional values. Furtherly, the six-day event is a place to exchange unique cultures in the world.

Hue Festival 2022 has not only brought different feelings to the participants but it has been also a new vitality to Thua Thien-Hue Province, contributing to affirming its position as a typical festival city of Vietnam as well as one of the unique cultural and tourist centers of the country.

As for foreigners' perspective, Simon, a German tourist shared that this was the first time he experienced Hue Festival and he was excited with the performances of Vietnamese and international art troupes, notably he expressed his impression of Belgium troupe and a traditional folk music show at the Hue Imperial Citadel.

Another tourist from Australia Sharon said that she came to Hue City at the time of Hue Festival’s opening. Sharon had an opportunity to experience art exhibitions, the Ao dai festival, music shows at night, and so on. This is the second time to Hue, and this year, the foreigner came back also for this special occasion. For her, this year’s festival was invested with an impressive lighting system. Definitely, she will come back to Hue with the next festivals in the future and introduce to her friends to Hue, Hue Festival as a must-visited tourist destination in the country.

Scott's family from Singapore said that all members of the family visited heritage sites and experienced programs at Hue Festival Week 2022. During the trip, they planned to learn about culture, history and food. All of them loved Vietnamese food, including Hue cuisine, added Ms. Scott.

Artist Mathieu Hocine, Head of French electropop band Kid Francescoli shared that he was very impressed with the Hue Festival, which is a special event with a diversified and plentiful combination of many artistic, music and dancing performances, exhibitions, food festivals, and so on. French electropop band hoped to have the opportunity to perform at the next festivals. 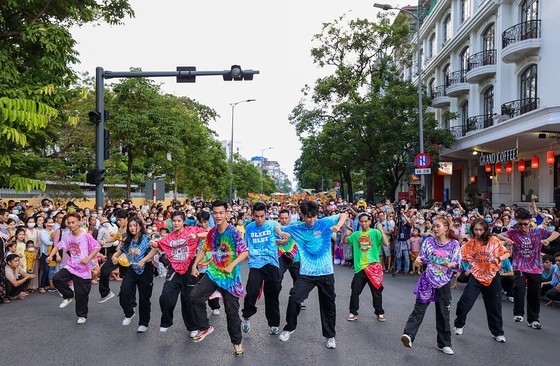 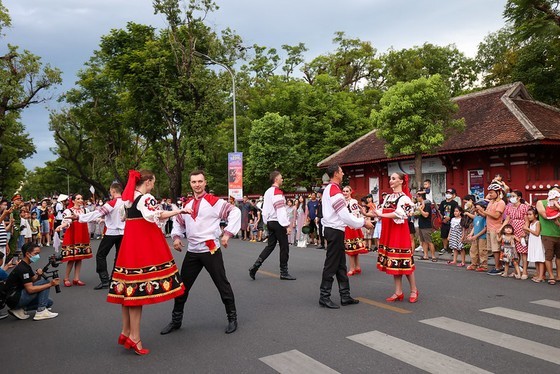 According to Deputy Head of Organizing Committee of Hue Festival 2022 Huynh Tien Dat, Hue Festival 2022 themed “Cultural heritage with integration and development” took place from June 25 to June 30 with the participation of art troupes from Russia, Brazil and many famous delegations of Vietnam. 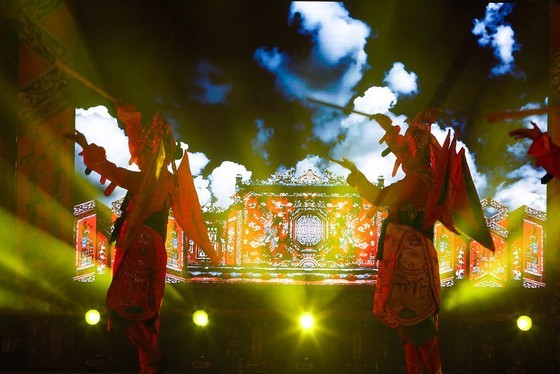 An art performance at Hue Festival Week 2022
There were eight main programs, 34 art performances and more than 30 attractive activities at 11 stages and sites in Thua Thien- Hue Province during the six-day festival, luring dozens of thousands of spectators, notably art show to open the Hue Festival, street art festival, beer festival, performances from domestic and international art troupes, a music show with songs of songwriter Trinh Cong Son, Ao dai festival, country market festival, EDM music show, Hue Festival Trade Fair, hot air balloon festival, and so on.
During Hue Festival Week 2022, the Complex of Hue Monuments, which is the first world UNESCO cultural heritage site in Vietnam, recorded 38,840 domestic arrivals and 1,464 foreigners bringing revenue of nearly VND5.8 billion (US$248,727).
Statistics from the Provincial Department of Tourism showed that from June 23 to June 30, Thua Thien- Hue Province received around 180,000 visitors, including 72,000 people staying at hotels and accommodations and the revenue from tourism services is estimated at VND155 billion (US$6.6 million). The average room capacity reached 85 percent, and over 93 percent only on June 24 and June 25. 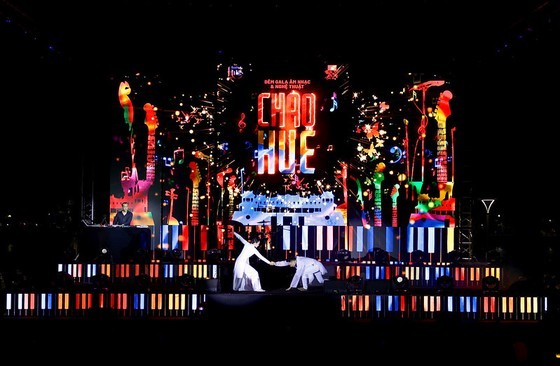 Hue Festival 2022 will continue to last until December in Thua Thien-Hue Province.

Hue Festival 2022 will continue to last until December in Thua Thien-Hue Province based on the atmosphere of cultural exchange and community solidarity towards the goal of peace, stability, sustainability and tourism development.

By Van Thang–Translated by Huyen Huong