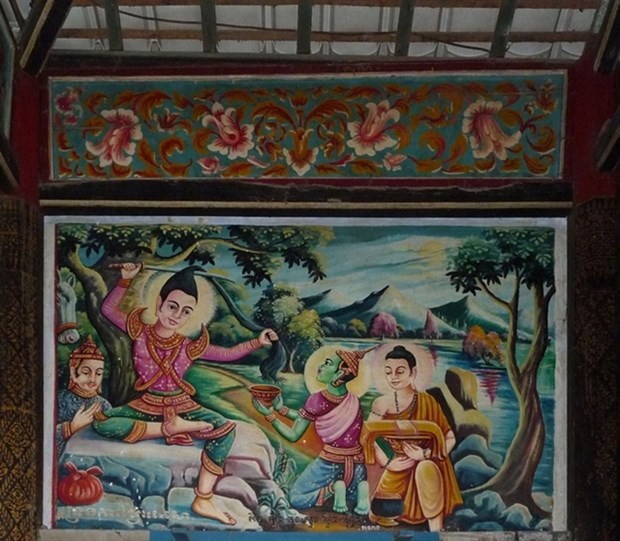 The art of painting on walls and ceiling originated from the Khmer ethnic minority in the provinces of An Giang, Kien Giang, Soc Trang, Tra Vinh, and Bac Lieu. (Photo courtesy of Soc Trang Literature & Arts Association)
Under the project, traditional music, theatre and literature works with artistic values which have originated from ethnic minorities will receive financial support.
Works featuring different forms of ethnic theatre and music will be released in videos, documentary films and books as a way to bring the arts closer to audiences.
Literary works will be printed in e-book and books with 3D technology.
Theatre and arts associations will run the five-year project, starting this year, on the publication and dissemination of ethnic folklore and cultural properties.
More than 1,500 literary works among 2,500 pieces will be published in ebooks. A collection of 54 books featuring theatre and music by ethnic people from different groups across the country will also be published.
According to People’s Artist Ha Quang Van of the Ho Chi Minh City Theatre’s Association, the association will work with folk and ethnic artisans, traditional art clubs and centres in southern provinces to collect, perform, record and film their works for release online to keep the arts alive.
“If we don’t offer urgent solutions and policies to help remote artists keep their art alive, many forms of Vietnamese ethnic arts will be gone in the near future,” Van said.
Van’s association is working with Soc Trang and Tra Vinh provinces to preserve and promote Du ke, a unique style of ethnic Khmer musical theatre in southern Vietnam
Du ke originated in Tra Vinh in 1920 from local farmers who loved to sing. The art is a product of the creativity of the Khmer ethnic people.
In traditional clothes, local residents sing, dance and stage plays based on the religions, traditional customs and culture of the Khmer in their traditional festivals such as the Khmer Festival called Chol Chnam Thmay (New Year festival), which begins in the third month of the lunar calendar.
The performances of Du ke are often staged by leading traditional theatres in the region, such as the Anh Binh Minh (Dawn) Traditional Art Troupe of Tra Vinh. The art also appears on TV shows by the Soc Trang Television & Radio Station.
“Through our performance, we hope young audiences can learn about traditional art and culture as well as learn useful lessons about love, life and people,” Meritorious Artist Thach Sung of the Anh Binh Minh troupe said.
"We're not looking to make a profit or gain glory from our art, but we hope to encourage people, particularly youth, to care about their culture much more than they do now," he added.
The Khmer ethnics in the provinces of An Giang, Kien Giang, Soc Trang, Tra Vinh, and Bac Lieu also painted murals on walls and ceilings. The paintings feature Buddhist art, culture and lifestyle of their communities. They often appear on walls in local Khmer pagodas.
“Khmer murals are very lively and persuasive, representing a southern lifestyle. They should be preserved and expanded to the world,” said culture researcher Huynh Thanh Binh.