A scene in the MV
Joseph Kwon is known as a multi-talented artist. He works as a musician, composer, singer, and producer in Korea and the K-pop market. He is known as one of the music therapists of the Well Hospital Voice Center and SBS Choir Radio Conductor.
Joseph Kwon said that his love for Vietnam is very natural. Since childhood, he has loved and always learned about Vietnam; subsequently, he takes every opportunity to come to Vietnam to live and work. His Vietnamese friends called him Joseph Quyen.
Joseph Quyen has lived in Vietnam for more than three years and learned a lot about Vietnamese life and people. During the outbreaks of the Covid-19 epidemic in Vietnam, he spent a lot of time composing and performing songs praising the friendship between Vietnam and Korea, and songs about love for Vietnam and Vietnamese food.

A scene in the MV
Joseph Kwon said that MV Waiting for you, 5000 years - I'm still waiting for you 5000 years was made from May 17 to July 12, 2022. The crew departed from Hanoi going to the Cuc Phuong National Forest, Trang An, Tam Chuc, Ba Be, Bac Kan, Ha Long in the Northern region, Ho Chi Minh City, Mui Ne, Sa Pa, Lao Cai, Da Nang, Hoi An.
Traveling to many lands and meeting Vietnamese people in many regions made him fall in love with this beautiful land even more. Joseph Kwon hoped that through my songs, the music videos meticulously recorded in 19 provinces and cities in Vietnam will attract many Koreans and friends around the world to know how beautiful and attractive Vietnam is! 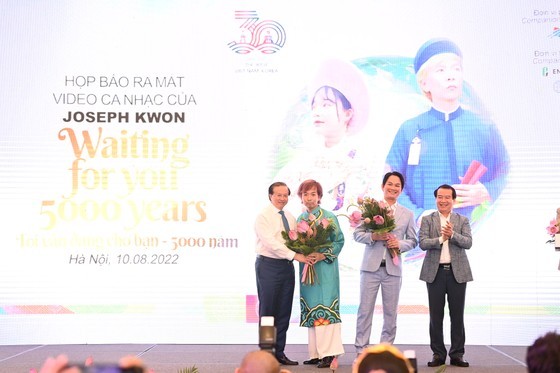 MV is recorded in response to the 30th anniversary of diplomatic relations between Vietnam and Korea
Mr. Ha Van Sieu - Deputy General Director of the Vietnam National Administration of Tourism, expressed his appreciation for the Korean male singer's love for Vietnam. Moreover, he expected to continue to accompany him to continue spreading the image of the country and the friendly and hospitality of Vietnam to people in the world.
The leader of the Vietnam National Administration of Tourism believed that descendants of the Ly dynasty in Korea Ly Xuong Can, coach of the Vietnamese football team Park Hang-seo, and Joseph Quyen's activities continue to foster the friendship between Vietnam and Korea.
For the first time, the MV Waiting for you, 5000 years will be NFTized and released on the Kitego platform so as to it could be brought to more music lovers who want to own art assets around the world.