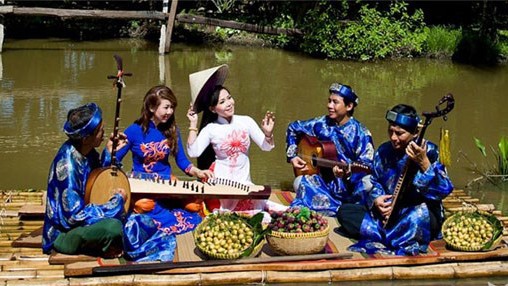 Illustrative image (Photo: SGGP)
The plan includes main activities, such as releasing a study book on the establishment and development of Don Ca Tai Tu in HCMC, collecting tangible and intangible cultural heritages related to this kind of art, issuing financial and investment policies to use and manage these heritages, training new generations in this traditional performance art at schools and clubs, organizing seminars on preserving and promoting the value of the Don Ca Tai Tu Nam Bo (southern amateur music) in the city.

UNESCO recognized Don Ca Tai Tu Nam Bo as an Intangible Cultural Heritage of Humanity. The southern amateur traditional music was recognized for the prize at the 8th Session of the Intergovernmental Committee for the Safeguarding of Intangible Cultural Heritage held in Baku, Azerbaijan in December 2013.
The southern traditional music style has been honored because it is a legacy passed through generations to recreate cultural exchanges of ethnic groups, according to experts in UNESCO.
Born 100 years ago, it has been a long-standing cultural tradition in the Mekong Delta since the end of the 19th century. Don Ca Tai Tu Nam Bo meets the criteria because it is passed down through generations in southern provinces, re-created via cultural exchanges, presented a concord and respect among ethnic groups.